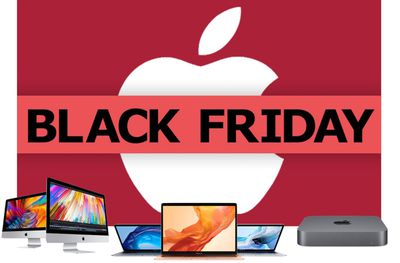 To help sort through all of the best Mac-related deals you can find online today (and in some Best Buy stores), we've broken down each offer in the lists below. As you read, the bolded discounts represent particularly great deals, and in some cases are the lowest-ever prices for these models.

We've got Black Friday deals on Apple's entire product lineup along with a long list of sites that are offering additional discounts on Mac-related accessories, so for a full list of everything that you can get at a discount today, make sure to check out our full Black Friday Roundup. If you've spotted an awesome deal on a Mac, make sure to share it in the comments and feel free to email us at tips@macrumors.com.

CarpalMac
It shows how astronomically priced Apple gear is now that even with decent discounts, the prices are still way above what I'd consider. Especially with practically portless, dodgy keyboarded, gimmicky gimped MacBooks that aren't fit for purpose, not for my needs.

I just so wish I'd bought a higher spec MBPr in 2013, had I known that that was going to be the last proper computer they'd make for over half a decade. It's both laughable and frustrating.
Score: 36 Votes (Like | Disagree)

RightMACatU
The best Black Friday deal for me is... not spending a single $ today :cool:
Score: 23 Votes (Like | Disagree)

It shows how astronomically priced Apple gear is now that even with decent discounts, the prices are still way above what I'd consider. Especially with practically portless, dodgy keyboarded, gimmicky gimped MacBooks that aren't fit for purpose, not for my needs.

I just so wish I'd bought a higher spec MBPr in 2013, had I known that that was going to be the last proper computer they'd make for over half a decade. It's both laughable and frustrating.

Who,buys this crap, no ssd on iMac. This is disgusting and embarrassing! What has apple become, a junk yard seller?
Score: 21 Votes (Like | Disagree)

I just so wish I'd bought a higher spec MBPr in 2013, had I known that that was going to be the last proper computer they'd make for over half a decade. It's both laughable and frustrating.

I am with you, but I can count my lucky stars.

And, it is one of the last Mohicans.

This stops cold, from 2016 on, with all Apple platforms built with uber-expensive, soldered flash.
Score: 10 Votes (Like | Disagree)

It's even worse here in Germany. Just as an example, the higher specced 15" Macbook Pro is 2800 USD in the US. In Germany, it's 3300 EUR, which is about 3800 USD, so a thousand bucks more. I mean, I get that there's a difference in how tax rates are indicated in those prices, but this is definitely way beyond just that. The prices are just a joke at this point and I don't see how anybody sane would ever buy anything from Apple here in Germany. It's not like Germany is some desolate third world country which involves a lot of risk for Apple doing business. I really don't get how and why the prices exploded so much.

Because Tim Cook needs to make record profits every quarter for the shareholders (and himself) or the board will replace him: the long-term future of Apple be damned! The only thing that matters any more is this and possibly next quarter, and that's it.
Score: 9 Votes (Like | Disagree)

scottinlexky
There's nothing appealing about stepping foot in the apple store any more.
Score: 7 Votes (Like | Disagree)
Read All Comments