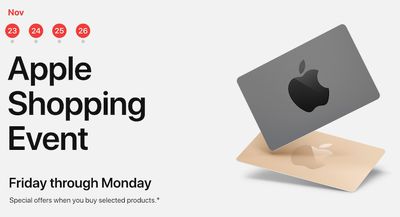 There is a limit of two Apple Store gift cards per product category per customer.

The deals are available via Apple.com, by phone at 1-800-APPLE, and at Apple Stores through November 26, which is Cyber Monday, an increasingly popular online-focused shopping holiday that follows Black Friday.

Black Friday marks one of the few times in a year that Apple offers deals on its products. Be sure to read our Black Friday roundup for several other deals on Apple products and accessories, with larger discounts in many cases.

Nice to see how much apple cares about students!!
Score: 10 Votes (Like | Disagree)

kawalerzysta
What gets me, is that in addition to weak deals, gift cars is not available when picking up the bought item. So if somebody buys 10.5 iPad Pro, they cannot use that gift card to buy lets say pencil, cover or other accessory in the store. They have to wait 24hrs and then they can use that card in physical store or online.
Score: 5 Votes (Like | Disagree)

DrJohnnyN
Pass. Better deals to be had.
Score: 5 Votes (Like | Disagree)

Nothing from Apple at all.
Score: 4 Votes (Like | Disagree)