Three Things to Know About the New Apple Pencil

Last week, Apple introduced a second-generation Apple Pencil that magnetically attaches to the new iPad Pro. It also features automatic pairing, wireless charging, tap to wake, double-tap to switch drawing tools, a more seamless design with no Lightning connector or cap, and a matte rather than glossy finish. 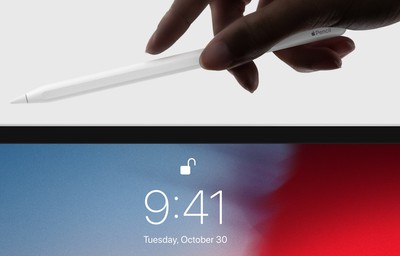 As the new Apple Pencil begins to arrive to customers around the world, we've learned some additional details about the drawing tool:

The new Apple Pencil is compatible with the latest 11-inch and 12.9-inch iPad Pro models. It retails for $129 in the United States with free custom laser engraving available exclusively for orders placed on Apple.com.

Apple has more details about the new Pencil on its website.

Khedron
No extra tip. Just how stingy can Tim get.
Score: 42 Votes (Like | Disagree)

Lounge vibes 05
Real Apple fans will buy tuns of them, and stick them all over there refrigerator
Score: 16 Votes (Like | Disagree)

So you're thinking that Tim Cook was sitting at his desk thinking how he can boost net income beyond the current 80 billion a year, and his solution was to remove a 25 cent piece of plastic from a product that makes up .001% of Apple's revenue? Yeah that's probably it.

If it is 25 cents per tip and they sell 5 million pencils, that is 1.25 million dollars. Even if they sell one pencil, it is 250k saved. I don't know why you think Tim Cook the financial wizard doesn't think of these things. For instance, stopping giving dongles for head phones, requiring the purchase of dongles for USB-C. These things all add up to millions of dollars for Apple.

Obviously they DO think about things like the tip. First it was there, now it's not. Someone made both decisions. This is precisely why you are not a CFO... You clearly don't think of the things that make companies more profitable.
Score: 14 Votes (Like | Disagree)

So you're thinking that Tim Cook was sitting at his desk thinking how he can boost net income beyond the current 80 billion a year, and his solution was to remove a 25 cent piece of plastic from a product that makes up .001% of Apple's revenue? Yeah that's probably it.

840quadra
Still dislike that Apple will not let us use the original Apple Pencil on this iPad. Charging it is not a problem.

1. Buy an Apple Lightning to USB-C cable (I already had one)
2. Attach Lightning adapter that ships with the original Apple Pencil to that cable
3. Attach the pencil to cable and adapter.

On my 10.5 I can see that the pencil is actually able to charge when connected to the 11 via this method, so it’s clear that Apple is simply blocking it from pairing via BT.

Sunday June 28, 2020 7:56 am PDT by Joe Rossignol
iPhone 12 models will not include EarPods or a power adapter in the box, analyst Ming-Chi Kuo said today in a research note obtained by MacRumors. This lines up with a prediction shared by analysts at Barclays earlier this week. Kuo said that Apple will instead release a new 20W power adapter as an optional accessory for iPhones and end production of its existing 5W and 18W power adapters...
Read Full Article • 853 comments

Monday June 29, 2020 7:48 am PDT by Joe Rossignol
While the terms and conditions for Apple's new "Developer Transition Kit" forbid developers from running benchmarks on the modified Mac mini with an A12Z chip, it appears that results are beginning to surface anyhow. Image Credit: Radek Pietruszewski Geekbench results uploaded so far suggest that the A12Z-based Mac mini has average single-core and multi-core scores of 811 and 2,781...
Read Full Article • 399 comments

Monday June 29, 2020 10:31 am PDT by Juli Clover
Apple's Developer Transition Kit equipped with an A12Z iPad Pro chip began arriving in the hands of developers this morning to help them get their apps ready for Macs running Apple Silicon, and though forbidden, the first thing some developers did was benchmark the machine. Multiple Geekbench results have indicated that the Developer Transition Kit, which is a Mac mini with an iPad Pro chip, ...
Read Full Article • 208 comments

Monday June 29, 2020 5:43 am PDT by Joe Rossignol
As part of WWDC last week, Apple announced that it will be switching to its own custom-designed processors for Macs starting later this year. As part of this transition, the company is allowing developers to apply for a modified Mac mini with an A12Z chip and 16GB of RAM to develop and test their apps on a Mac with Arm-based architecture. As noted on Twitter and in the MacRumors forums, some...
Read Full Article • 162 comments

Monday June 29, 2020 11:17 am PDT by Juli Clover
The New York Times today announced that it is pulling out of Apple News, as the service does not "align with its strategy of building direct relationships with paying readers." Starting today, articles from The New York Times will no longer show up in the Apple News app. The news site says that Apple has given it "little in the way of direct relationships with readers" and "little control...
Read Full Article • 208 comments

Monday June 29, 2020 12:30 pm PDT by Juli Clover
Apple today launched a new Apple Card program and website that are designed to help people who have their Apple Card applications declined improve their credit to qualify, reports TechCrunch. Starting today, declined Apple Card applicants will begin seeing emails that offer the Path to Apple Card program, which is opt-in and can run for four months. It uses the information from the initial...
Read Full Article • 121 comments

Fourth of July Deals: Save on Apple Devices and Accessories Including HomePod, Anker Products, and More