Following the release of watchOS 5.1 last Tuesday morning, some Apple Watch Series 4 owners began complaining that the update had bricked their watches, leaving the devices stuck at the Apple logo.

The complaints led Apple to pull the watchOS 5.1 update to avoid further incidents, and it's been unavailable since Tuesday afternoon. 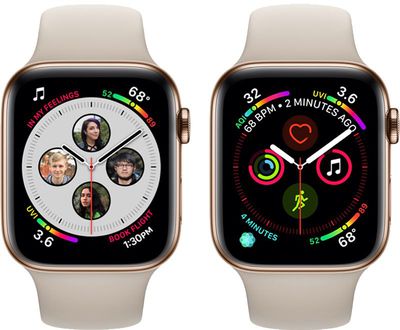 As of today, Apple has released an updated version of watchOS, watchOS 5.1.1, that fixes the bug that caused some Apple Watch devices to be rendered non-functional.

Not all Apple Watch owners who downloaded the original watchOS 5.1 update were impacted by the bug, but those who were will need to contact Apple as Apple has been sending out replacement Apple Watches. Non-functional Apple Watches need to be repaired by Apple and won't be fixable with the new watchOS 5.1.1 update.

Fall detection was improved, two bugs that could prevent Walkie-Talkie from working were addressed, and an issue that could cause some Activity awards not to show up properly was resolved.

eagle33199
I missed out on the chance to brick my watch last week, I'm going to rush out to be one of the first to try this new version today!
Score: 22 Votes (Like | Disagree)

Bazooka-joe
Ha ha, who's first because i can tell you, it ain't gonna be me guys :p
Score: 9 Votes (Like | Disagree)

OldSchoolMacGuy
Updated my Series 4 before it was pulled without issue.
Score: 9 Votes (Like | Disagree)