Apple today seeded the first beta of an upcoming iOS 12.1.1 update to its public beta testing group, one day after seeding the same beta to developers and two days after the release of the iOS 12.1 update.

Beta testers who have signed up for Apple's beta testing program will receive the iOS 12.1.1 beta update over-the-air after installing the proper certificate on an iOS device. 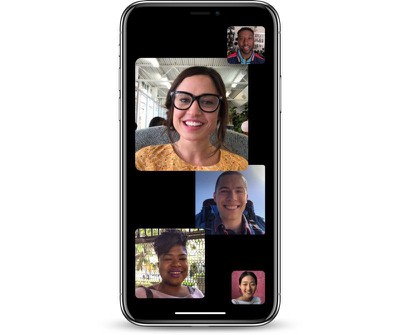 Those who want to join the beta testing program can sign up on Apple's beta testing website, which gives users access to iOS, macOS, and tvOS betas.

The iOS 12.1.1 update introduces some significant improvements to the FaceTime interface, and it re-adds the feature that's designed to let you take a Live Photo while on a FaceTime call.

In iOS 12.1.1, FaceTime features a reworked bottom bar that includes quick access buttons for muting a call and flipping the camera. Sliding up on the bottom bar brings up additional options with conversation participants.

Previously, FaceTime users were required to tap on three dots to access a secondary menu with these features.

The update also includes a new option in the Apple News app that lets you hide the side bar if desired.

tvguru
Glad they’re making it easy to flip the camera in FaceTime again. That was a huge pain with kids bouncing back and forth.
Score: 7 Votes (Like | Disagree)

Holy cow! Apple REDUCED the number of steps to do something?? They've been really good at hiding things away and then requiring multiple steps to do stuff that used to be front and center the last few years.

Insane they moved it into a menu at all!? One of the most useful features is flipping the camera, and they moved it because why??? Whomever did that should be fired, they clearly have no idea about useful interface design
Score: 7 Votes (Like | Disagree)

urbanslaughter1997
I can't believe they fixed the camera flip in FaceTime! I'm so glad. We ALL hated the way it was implemented in iOS12. I never imagined they'd fix it that fast. That's great news.
Score: 6 Votes (Like | Disagree)

NMBob
Holy cow! Apple REDUCED the number of steps to do something?? They've been really good at hiding things away and then requiring multiple steps to do stuff that used to be front and center the last few years.
Score: 3 Votes (Like | Disagree)

AMTYVLE
Please with these people's faces already. I can't.
Score: 3 Votes (Like | Disagree)

Guda.FL
I have to say Group FaceTime....did not have the beta. It's got a few bugs that were finding as im using it quite a bit more. Interface feels little sloppy un apple final product like...or just me.
Score: 2 Votes (Like | Disagree)
Read All Comments

Monday June 14, 2021 3:41 am PDT by Tim Hardwick
This year's Apple Watch Series 7 is likely to have thinner display bezels and use a new lamination technique that brings the display closer to the front cover, according to Bloomberg's Mark Gurman. From the report: The Cupertino, California-based tech giant is planning to refresh the line this year -- with a model likely dubbed the Apple Watch Series 7 -- by adding a faster processor,...
Read Full Article • 163 comments

Monday June 14, 2021 8:00 am PDT by Eric Slivka
We've seen a lot of teasers about the Beats Studio Buds over the past month since they first showed up in Apple's beta software updates, and today they're finally official. The Beats Studio Buds are available to order today in red, white, and black ahead of a June 24 ship date, and they're priced at $149.99. The Studio Buds are the first Beats-branded earbuds to truly compete with AirPods...
Read Full Article • 142 comments

Saturday June 12, 2021 7:01 am PDT by Sami Fathi
In a currently unlisted ad on YouTube, Apple is promoting the versatility, portability, and power of the M1 iPad Pro in a fun musical inspired by The Little Mermaid's "Part of Your World" soundtrack. In the ad, which features the main character using an M1 iPad Pro, Magic Keyboard, and Apple Pencil, multiple users can be seen struggling with their old PCs indoors while hoping that they can...
Read Full Article • 364 comments

Monday June 14, 2021 12:50 pm PDT by Juli Clover
Some M1 iMacs appear to have a manufacturing defect that causes the display to be mounted on the stand in a way that's not perfectly aligned, leading to a crooked display. YouTuber iPhonedo over the weekend published a review of the M1 iMac, and he found that his machine appeared to be tilted on one side, a mounting disparity that was visibly noticeable and proved with a ruler. Another...
Read Full Article • 150 comments