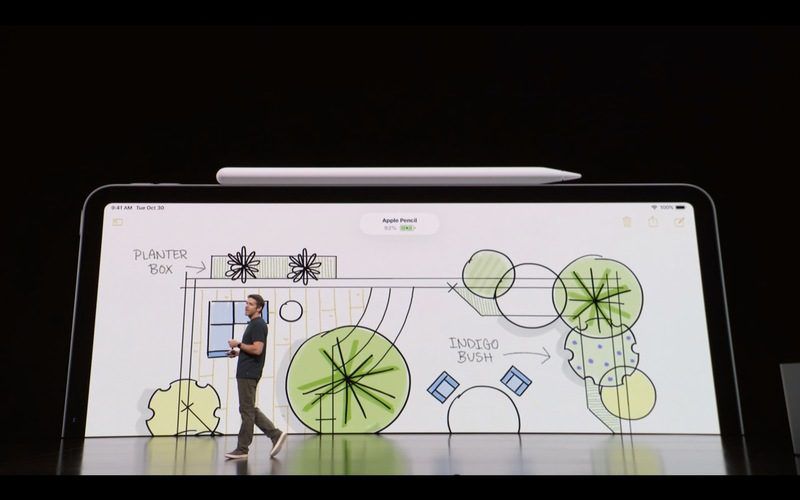 The biggest addition to the Pencil, aside from the new magnetic charging feature, is a double-tap gesture — a finger tap on the pencil itself while you hold it — that can do different things depending on the app. In Notes, for example, a double-tap changes the tool. In Photoshop for iPad, a double-tap zooms in or out of the image. Taps are customizable, though, for better personalization. Tap a locked iPad with the pencil, and it wakes up the device and opens right up into the Notes app.

There are no connectors or moving parts now, just the simple pencil itself. Apple also offers engraving through the Apple Store, to personalize it further (helpful for telling Pencils apart in a design studio).

Like the previous pencil, it works with no perceptible lag, is pressure sensitive for drawing and sketching, and is aware of tilt for shading.

Mac 128
The double-tap switch to an eraser is so much more efficient than flipping it over to use the end as an eraser.

I’ll be curious to see how his Pencil can be adapted to use with older iPads for charging. It’s obviously using some kind of Qi charging, so maybe there will be a small Lightning dongle available for it?
Rating: 3 Votes

(along with everything else that they introduced...at an increased price) :rolleyes:

tuffigirl
I have been waiting for the new iPad Pro & it does not disappoint. Wireless pencil charging and being able to charge your iPhone as well? Yep I'll be running to the Apple store!
Rating: 2 Votes

macduke
Ordered the new one to go with my new 12.9" iPad Pro. Kinda wish I hadn't bought that Apple Pencil last year, but eventually my kid will use it as a hand me down once she has a device able to use it.

This seems to address all of my gripes.

* It won't lose the cap
* It has a flat edge so it won't roll away
* It charges without having to be plugged into the iPad or anything
* It pairs seamlessly
* It attaches to the side (and without battery drain issues like third party cases have sensing the screen next to it)
* It now supports a gesture to toggle modes, assign to undo key, etc.

It costs more at $129, but for that price, I think it's worth all the additional benefits. It just sucks for those of us who more recently purchased an Apple Pencil.
Rating: 2 Votes

I have been waiting for the new iPad Pro & it does not disappoint. Wireless pencil charging and being able to charge your iPhone as well? Yep I'll be running to the Apple store!


The loss of Lightning is the only real problem here. But at least there’s a simple dongle for that. So I don’t have to carry different cables for it and he iPhone.
Rating: 1 Votes

Right that was what I meant. If the magnet is pretty strong then it might be able to stay attached even in my bag. But I guess we’ll see soon.

You’re right there does need to be a separate way to charge. Example: if someone keeps extra an pencil in their home or office.

I’m really glad I didn’t put any money on Apple adding USB-C, I honestly didn’t except that.

Why? Everyone knew it was coming, the rumors states it awhile back
Rating: 1 Votes

Relentless Power
The new Apple Pencil looks great, and I think the magnetic wireless charging is brilliant, however; I just can’t justify the price point being I did wouldn’t have a need for this personally, unless its for someone that’s into [sketching or heavy note-taking], this wouldn’t be for me. But the version two of the Apple Pencil looks to be very successful for what it’s offering.
Rating: 1 Votes
[ Read All Comments ]