Tim Cook: If Data Privacy Isn't Addressed, the Problem 'Gets So Large It May Be Impossible to Fix'

Apple CEO Tim Cook recently sat down for an interview with CNN, where he discussed privacy, the controversial Bloomberg story claiming Apple was hacked via tiny chips embedded in server motherboards, and why he opted to come out as gay.

On privacy law, Cook said that while he's "not a pro regulation kind of person," there are instances when the free market doesn't work and it's necessary to "take an action." Privacy, says Cook, is one of the top issues of this century, and if we don't address it now, "the problem gets so large it may be impossible to fix. 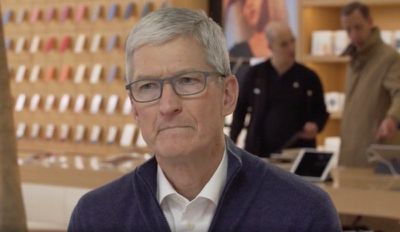 In this case, it's clear that the amount of things that can be collected about you, without your knowledge, maybe with your consent -- although it's a 70 page legal piece of paper -- isn't reasonable. And these things can be used for such nefarious things. We've seen examples of this over the last several years. We think it's time now to take this thing and put it under control.

Cook went on to say that this is an issue that's much broader than the tech industry because there are many firms out there collecting data. Privacy law is "critical to every country in the world."

According to Cook, his position is that the user should be completely in control of their data in a very transparent manner. "Your data is yours," said Cook.

On the topic of Bloomberg, Cook once again called on the news site to retract its story suggesting the Chinese government planted microchips in the Supermicro servers that it used in its data centers.

I want to be unequivocal on this. That article, the part about Apple, is 100 percent a lie. It is completely inaccurate, there is no truth behind it. We never found a malicious chip in any servers, we never reported something like that to the FBI, the FBI never contacted us about anything like that.

Cook said that the fact that the Apple portion of the article is untrue "casts doubt on the broader story," and he pointed out that Amazon has also made comments denying the truth of what Bloomberg reported.

My view is they need to retract that article because this is not doing anybody any good to have fake information out there. It doesn't do them any good, it doesn't do the cause any good. Cybersecurity is an important topic. A really important topic. We should put all of our energies into protecting the companies, the country, but not chasing a ghost.

On the topic of being gay and the Trump Administration's plan to introduce narrow definitions for gender at birth that would impact transgender rights, Cook said that he strongly believes everyone should be treated with dignity and respect, a statement he's repeated time and time again.

Cook said that he himself came out as being gay several years ago to inspire young people who were bullied and mistreated for their sexual orientation.

I was public because I began to receive stories from kids who read something online that I was gay and they were going through being bullied, feeling like their family didn't love them, being pushed out of their home, very close to suicide, things that really pulled my heart.

And started saying you know, I am a private person and so I've kept me to my small circle. And I started thinking that is a selfish thing to do at this point. I need to be bigger than that. I need to do something for them and show them that you can be gay and still go on to do some big jobs in life. That there's a path there. And that is the reason I did it.

Cook's interview with CNN followed his appearance at the 40th International Conference of Data Protection and Privacy Commissioners, where he spoke passionately on the need for strong data protection laws in the United States.

Cook's full comments to CNN can be watched across several videos published by the site: on privacy, on Bloomberg, and on being gay.

Tapiture
Of the “big four” tech companies (Apple, Amazon, Google, Facebook), Apple is probably the one with the most respect for customer’s data, and I think that integrity is part of the reason they’ll continue to be so successful.
Score: 34 Votes (Like | Disagree)

Porco
I may not be super-happy with everything Apple do with their products (because I care), but I am really pleased Apple, and Cook, takes many of the political and ethical positions they do on the stuff mentioned here. I don't take it for granted, and I don't think Apple are perfect, but I don't see the same commitment to privacy or human rights from any of their competitors, across all the products categories in which they compete.

It's a precious thing that we have such a dominant company with these views, I just hope it's enough, and that Apple keep fighting the good fight.
Score: 30 Votes (Like | Disagree)

How disingenuous.
Please define "Your Data".

It is by far not as simplistic nor as clear cut as TC would make it sound. :cool:

Anything you do on your phone is YOURS - until you let someone else access it.

Now on this device, what is "My Data"? Who "owns" it? Who should have access to it?

Then I look at my Razer (personal phone). Same applies excluding work. Though I do get some there too. So in reality it does apply.

It is by far not as simplistic nor as clear cut as TC would make it sound. :cool:

macduke
Every day we are seeing the horrific downsides to giving away our private data. Apple will be on the right side of history. I'm glad that Tim Cook is putting himself out there to lead the fight for privacy. Meanwhile the cowards at Google hid away in their playground campus not even bothering to show up when the Senate asked them to testify:

It’s important for individuals with power and influence to use it to speak out about things like homosexuality. It helps to culturally normalize LGBTQ folks, and it helps to empower those who may be in a position where they experience discrimination or judgment for just being themselves. The more people who are out and willing to talk about it the better.