Apple has registered new Macs with the Eurasian Economic Commission (EEC) this week, indicating that new models and refreshes could be just around the corner. The filings, discovered by MySmartPrice and French website Consomac, are legally required for any devices with encryption sold in Armenia, Belarus, Kazakhstan, Kyrgyzstan, and Russia. 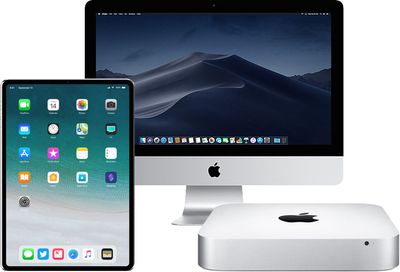 Apple is expected to to introduce a new entry-level 13-inch MacBook at its October 30 event in New York City. The more affordable Mac would serve as a replacement for the MacBook Air, and while details have been scant about the rumored machine, it could turn out to belong to the 12-inch MacBook family.

It's not known what the rumored 13-inch MacBook would be priced at, but the MacBook Air sells for $999, a price point Apple has thus far been unable to match with the 12-inch MacBook and the MacBook Pro.

The Mac mini, which has not been updated for more than 1,400 days, is also expected to be refreshed this month, for the first time since 2014. We don't know a lot about what to expect for the Mac mini update, but upgraded internals and faster processors are a dead cert.

Apple's iMac range is also due at least a refresh, with current models on sale having not been updated in the last 505 days. It's not inconceivable that Apple also plans to give its MacBook Pro lineup a processor bump.

Meanwhile, new iPad Pro models announced at the event are expected to adopt an iPhone X-style design with no Home button, slimmer bezels, and a TrueDepth camera system that will enable Face ID for biometric authentication, while a new updated iPad mini could also feature.

Apple's New York City event on Tuesday, October 30 will take place at the Brooklyn Academy of Music, Howard Gilman Opera House, kicking off at 10:00 a.m. Eastern Time. Apple typically streams the event live on its website and on Apple TV, but for those who are unable to watch, MacRumors will be providing full event coverage both on MacRumors.com and through our MacRumorsLive Twitter account.

Wanted797
When the Mac mini is updated can the crowd unleash deafening applause just to make a point.
Score: 93 Votes (Like | Disagree)

AngerDanger
There’s not nearly enough notch in that product photo for my liking.

Ahh, so much better.

Now just don’t screw us on ports, Apple. The whole point is a peripherals hub. It’s been so long I’m starting to get nervous they forgot how to make a proper modular desktop.
Score: 17 Votes (Like | Disagree)
Read All Comments