Apple is working on several new products for its Mac lineup, including a new low-cost MacBook Air and a Pro-focused Mac mini, reports Bloomberg's Mark Gurman.

The upcoming low-cost MacBook Air will be similar in design to the current MacBook Air, but with slimmer bezels around the display. It will continue to be sized around 13 inches, and it will feature a Retina display. 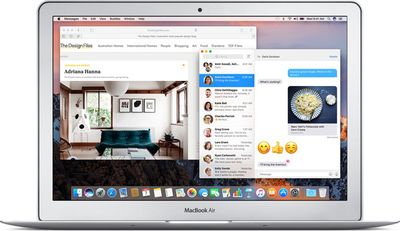 Apple is also said to be working on an upgrade to the Mac mini, which has not seen an update since October 2014. Little detail is available about the upcoming machine, but it is said to be focused on pro users with new storage and processor options that are likely to make it more expensive than previous Mac mini products.

2017 rumors suggested Apple was working on a Mac mini that "won't be so mini anymore," which would be in line with a machine that has more powerful, less compact components.

Bloomberg suggests Apple could potentially be planning to introduce the new Macs in October, following a September event that will see the launch of new iPhones and new Apple Watch models.

New iPad Pro models with Face ID are also in the works, but it is not clear if these will debut in September or October.

Edit: Because a few guys seem to be reading this as a jab at MacRumors, let me clarify it is NOT. It is excitement that maybe Apple is doing something to generate some new Mac rumors. IMO, MacRumors is great. And I'm glad to see something maybe happening on the Mac side of Apple. "More, more, more!" Apple. "Make us BELIEVE!" Apple.
Score: 90 Votes (Like | Disagree)

jetjaguar
Will be nice for all those mac mini owners who want to finally upgrade.
Score: 56 Votes (Like | Disagree)

picaman
A pro-focused Mac mini would be just perfect for me. Hopefully there is something for the lower end as well.
Score: 52 Votes (Like | Disagree)

stukdog
As my internet friends like to say, The new Mac mini is almost certainly coming...
Score: 30 Votes (Like | Disagree)
Read All Comments

Sunday February 5, 2023 6:07 am PST by Joe Rossignol
Apple has discussed selling a new top-of-the-line iPhone alongside the Pro and Pro Max models in 2024 at the earliest, according to Bloomberg's Mark Gurman. Based on this timeframe, the device would be part of the iPhone 16 lineup or later. In a September 2022 edition of his weekly "Power On" newsletter, Gurman said there was "potential" for an iPhone 15 Ultra to replace the iPhone 15 Pro...
Read Full Article • 465 comments

Saturday February 4, 2023 10:05 am PST by Eric Slivka
Online retailer TigerDirect has slashed pricing on the M1 iPad Air in several colors, offering the base 64GB configuration for just $313.99 in Purple and Pink. Note: MacRumors is an affiliate partner with TigerDirect. When you click a link and make a purchase, we may receive a small payment, which helps us keep the site running. That's a savings of 48% compared to Apple's normal $599.00...
Read Full Article • 503 comments

Sunday February 5, 2023 6:06 am PST by Hartley Charlton
A new version of the Mac Studio with the "M2 Ultra" chip is unlikely to arrive in the near future, according to Bloomberg's Mark Gurman. In the latest edition of his "Power On" newsletter, Gurman explained that since the upcoming Apple silicon Mac Pro is "very similar in functionality to the Mac Studio," Apple may wait until the release of M3- or M4-series chips to update the machine, or...
Read Full Article • 428 comments