Popular farming simulation and RPG Stardew Valley expanded to mobile devices today, and can now be downloaded from the iOS App Store on an iPhone or iPad.

If you're unfamiliar with Stardew Valley, it's an incredibly in-depth simulation game where players are tasked with taking over a small, failing farm, working to bring it back to prosperity by planting and tending crops, raising animals, and crafting goods to sell.


Similar to games like Harvest Moon and Animal Crossing, Stardew Valley also lets players fight monsters to earn money, mine ores, fish, get to know townspeople, and engage in social activities in the town. The game cycles through different seasons with various crops and activities to partake in as the game progresses through the years, so there's always something new and exciting to do.

Stardew Valley offers hundreds of hours of gameplay, and there are no in-app purchases to deal with. A farming simulation might not sound appealing, but Stardew Valley sucks players in with crop and farm strategies, min/maxing profit each season, engaging combat, a never-ending list of achievements to earn, and so much more.

The mobile version of Stardew Valley is the full version of the game that "plays almost identically to all the other versions, but with the addition of touch-based controls suitable for the iPhone and iPad. 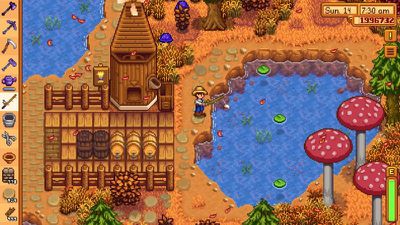 All single-player content from the 1.3 patch is available, but Stardew Valley for iOS does not support multiple players. If you've previously played Stardew Valley on PC or Mac (it first came out in 2016), you will be able to transfer your save data to iOS using iTunes.

Ahead of the launch of Stardew Valley, our sister site TouchArcade was able to go hands-on with the game, and TouchArcade editor-in-chief Eli Hodapp posted an in-depth review earlier today.

According to Hodapp, compared to the desktop version, the mobile port of Stardew Valley is "about as good as it possibly could be." It's a full-fledged game and while the control system isn't "super ideal," it still "more than gets the job done."

Tapping on the screen moves your character, while a toolbar lets you change the item you have equipped. Auto-combat is enabled by default, and whenever you're in range of an enemy, your character will swing automatically. It can get "wonky" though, says Hodapp, if you run into threatening enemies. Luckily, there's an option for manual contact.

It's best to play on an iPad because navigation can be difficult on an iPhone, but it's doable. All in all, Stardew Valley received TouchArcade's highest recommendation.

This game is so good it's stupid, and is my most played game on my Switch. As I mentioned in the preview, the best version of Stardew Valley is the one you have with you, so even with some minor control issues at launch, I wouldn't be surprised if I also clock in hundreds of hours of play in this version of the game. Again, if you're the kind of person who often complains about free to play games and the lack of depth in mobile games, do not hesitate to put your money where your mouth is and buy Stardew Valley.

Stardew Valley can be purchased from the App Store for $7.99. [Direct Link]

I can't imagine why people are wasting their time with such a useless game. There's only more smartphone grinding involved, heavily increasing nomophobia and rude screen-flicking in social situations.

What are you talking about, this isn't FarmVille. Stardew Valley is one of the best games to come out in the last 10 years, it's an instant classic.
Score: 16 Votes (Like | Disagree)

Seoras
Nice to see a return to straight up paid software applications.
Freemium is just so toxic.
Score: 11 Votes (Like | Disagree)

Blackstick
Most people don’t realize Stardew Valley is the work of one developer. Yep, he did the art, code, music... nearly everything. He got help with the multiplayer code but that’s it.

TouchMint.com
So glad they kept this premium instead of trying to gut this and turn it into a freedom scam job like most mobile ports (sims, rollercoaster, virtually every other big game)
Score: 7 Votes (Like | Disagree)

Frign
I can't imagine why people are wasting their time with such a useless game. There's only more smartphone grinding involved, heavily increasing nomophobia and rude screen-flicking in social situations.
Score: 4 Votes (Like | Disagree)

I hear everybody praise Stardew Valley and am thinking about buying it for my Switch but it looks very complex. Is it easy to get frustrated if you don‘t know all the tricks and details?

no not really because it’s not going to punish you for not doing X or Y the first year on your farm or the tenth. super casual. love this game, it’s a great pick up and put down, or play for two hours haha.
Score: 4 Votes (Like | Disagree)
Read All Comments