Later this week, Apple CEO Tim Cook is set to speak at the European Data Protection Conference in Brussels during the "Debating Ethics: Dignity and Respect in Data Driven Life" session.

Ahead of the event on Wednesday, Cook is in Europe visiting app developers and filmmakers who work with the iPhone. Cook has been sharing his European adventures on Twitter. 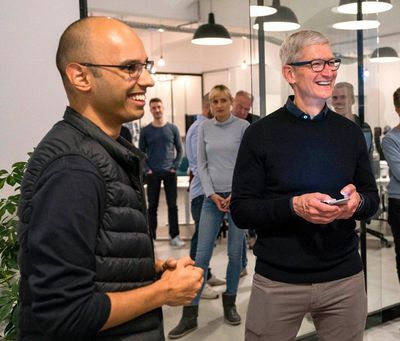 Cook visiting the developers behind Asana Rebel, a yoga app
Cook started off the week in Berlin, where he met with developer Peter Kolski and took a look at mauAR, an upcoming augmented reality app that will display the Berlin Wall as it was prior to its demolition in the 1990s.

Schön, wieder einmal in Berlin zu sein! Thank you @peterkolski and the mauAR team for bringing the Berlin Wall's history to life through augmented reality -- a new way to learn from the past. We are looking forward to seeing your app on the App Store! pic.twitter.com/NhwGUUgG2O — Tim Cook (@tim_cook) October 21, 2018

Cook went on to visit the Asana Rebel team, who have created an augmented reality yoga app available on the iOS App Store.

Here's to the rebels! Thanks for the visit, @AsanaRebel, and for sharing your enthusiasm for yoga and wellbeing. 🧘‍♂️ We're thrilled when entrepreneurs like you use the App Store to turn their passion into a thriving global business. pic.twitter.com/G4FOR3HtNK — Tim Cook (@tim_cook) October 21, 2018

After that, he stopped off in Paris where he met with French filmmaker Claude Lelouch, who shot his upcoming movie on the iPhone.

Bonjour Paris! 🇫🇷 Honored to meet legendary director Claude Lelouch and hear about his upcoming film, which will be #shotoniphone. In 50 years of filmmaking, he says he's "never been happier" than when shooting with iPhone! pic.twitter.com/t5q8J8jOW6 — Tim Cook (@tim_cook) October 22, 2018

Cook then stopped by the offices of Foodvisor in Paris. Foodvisor is an app that is designed to analyze the nutrients in food through a photograph.

Now here's a good reason to snap that photo of your lunch! Had a blast at @foodvisor_app's office in Paris, seeing how their artificial intelligence makes food tracking easy. 🍣 pic.twitter.com/i1NoM1OLM3 — Tim Cook (@tim_cook) October 22, 2018

After visiting Foodvisor, Cook stopped by L'Atelier des Artistes en Exil in Paris, which showcases the artwork of artist refugees around the world.

A profoundly moving visit to @aartistesenexil in Paris. Through their works of creativity and courage, these artists are shining a light on the hardships that so many face as refugees. “On ne voit bien qu'avec le cœur. L'essentiel est invisible pour les yeux.” pic.twitter.com/rKGz2rlFAX — Tim Cook (@tim_cook) October 22, 2018

Cook has one more day in Europe ahead of the Brussels conference, and he is planning to meet with French president Emmanuel Macron at the Élysée Palace tomorrow, where taxes and developer relationships may be topics of conversation.

Cook will be in Belgium on Wednesday, and following the conference, he may spend some more time in Europe before flying back to the United States to prepare for Apple's October 30th event in New York City.

otternonsense
Typical Tim, pontificating, going off on tangents, and hanging out like a social butterfly for the photo op.
Score: 6 Votes (Like | Disagree)

Do everything except actually run Apple.

You're so smart. And the rest of the world is so dumb. Tell us all how to live.
Oh, and make more watch bands and emojis. Those are fun.
Score: 5 Votes (Like | Disagree)

why is that guy wearing a winter vest indoors?

alfonsog
I think Tim has done great as CEO and I wouldn't mind going out with him as he's deceptively dominant as he hides behind his childlike obsession with magical things; that's my type! He's only 57 he could be CEO for a long time coming. My business does a 1.2 million a year and Apple does 229 billion year. :confused:
Score: 2 Votes (Like | Disagree)

Bistroengine
Damn, that handheld iPhone rig is a beast. I want to know more about it!
Score: 2 Votes (Like | Disagree)
Read All Comments

Thursday September 29, 2022 12:38 pm PDT by Juli Clover
Tony Blevins, Apple's vice president of procurement, is set to depart the company after he made a crude comment about his profession in a recent TikTok video, reports Bloomberg. Blevins was in a video by TikTok creator Daniel Mac, who was doing a series on the jobs of people he spotted with expensive cars. After seeing Blevins in an expensive Mercedes-Benz SLR McLaren, Mac asked Blevins what ...
Read Full Article • 361 comments