Apogee today announced the Jam+, an updated version of its portable USB instrument input and output device that connects an electric guitar, bass, keyboard, or any acoustic instrument with pick-up directly to an iOS device, Mac, or PC for recording audio. The launch of the Jam+ comes eight years after the original Jam debuted in Apple stores worldwide. 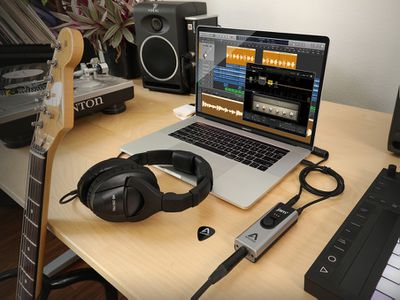 The new Jam+ has a rugged metal chassis and soft touch base with enhanced PureDIGITAL circuitry for better true-tone audio resolution, stereo output to connect headphones or powered speakers, low latency monitoring with a Blend feature, and an "Overdrive" mode that makes virtual amplifiers and effects pedals sound more realistic.

Those who buy the Jam+ will also get the BIAS FX Jam software bundle from Positive Grid, including a premium selection of three amplifiers and six essential pedal effects. Otherwise, Apogee promises pristine sound quality, easy plug in and play set-up with no configuration required, 24-bit/96kHz high-resolution audio, and included Lightning, USB, and USB-C cables.

Notwithstanding the software that comes with it and iOS compatibility, isn't this basically just a pre-amp?

I mean, you could get something like the Focusrite Scarlett 2i2 for even cheaper and that has far better functionality, such as two 3.5 jack inputs, native mic inputs, many more outputs...

Hoping somebody can correct me. If you're using a Mac only and not doing any recording through iOS, I can't see the benefit of buying this for such a high price. Is there something it does that I'm missing? :confused:

It depends on the quality of the preamps, and the Analogue to Digital convertors. I also have a feeling that Apogee interfaces have some degree of DSP effects built in. But having said that, I can't fault the Focusrite audio gear. I have both a Scarlett 2i4 and Clarett 8Pre and they are great sounding, and fantastic value for money.
Score: 2 Votes (Like | Disagree)

peglegjack
I want to get the Apogee One for iPad and Mac, but it's almost 6 years old. Kinda wondering if they're going to update it soon. I have a Duet 2 now, but I feel like it's overkill for me at the moment, and I can't connect it to iOS.
Score: 1 Votes (Like | Disagree)

x-evil-x
and doesnt have power for that usb? so you plug in your phone and it won't keep it charging while using? So this is only good for a computer then seems like
Score: 1 Votes (Like | Disagree)
Read All Comments

Monday September 26, 2022 6:23 am PDT by Sami Fathi
iPhone 14 Pro customers on the Verizon network in the U.S. are reporting issues with slow and unreliable 5G cellular connections and calls randomly dropping. Several threads on Reddit (1,2,3) and the MacRumors forums chronicle issues faced by Verizon customers and Apple's latest iPhone. According to user reports, signal strength on the iPhone 14 Pro is unreliable and weak, while other...
Read Full Article • 159 comments