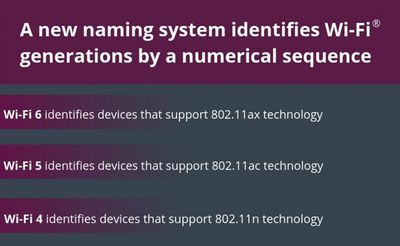 "For nearly two decades, Wi-Fi users have had to sort through technical naming conventions to determine if their devices support the latest Wi-Fi," said Edgar Figueroa, president and CEO of Wi-Fi Alliance. "Wi-Fi Alliance is excited to introduce Wi-Fi 6, and present a new naming scheme to help industry and Wi-Fi users easily understand the Wi-Fi generation supported by their device or connection."

Wi-Fi 6 will introduce higher data rates, increased capacity, better performance in dense environments like concerts and sporting events, and improved power efficiency so Wi-Fi won't eat up as much battery on future devices.

In 802.11ax tests, speeds of up to 4.8Gbit/s over the 5GHz band have been reached. In demonstrations at CES, speeds maxed out at 11Gbit/s.

The new capabilities being introduced are outlined below, as specified by the Wi-Fi Alliance.

Wi-Fi 6 is expected to provide performance improvements to smart home setups with multiple Internet of Things devices, as well as businesses and those running large-scale deployments. The Wi-Fi 6 standard is expected to be finalized next year.

Keness
I support this wholeheartedly... Having to do tech support for family and friends is tedious with the technobabble. This just makes a lot of sense.
Score: 34 Votes (Like | Disagree)

miniyou64
Wow its almost like they took a page out of Apples naming convention book
Score: 7 Votes (Like | Disagree)

If we are to believe that all future versions of WiFi - for example, WiFi7 - would both increase in signal strength, power, distance, speed, etc - then I'm all for this, otherwise it's the same problem we have now with a different name. With the way the 802.11 protocol has worked so far, this hasn't proven true, there are often revisions that focus more on speed or power, but rarely both.
Score: 7 Votes (Like | Disagree)
Read All Comments