Apple Pay Cash, Apple's mobile peer-to-peer payments service, could be available sooner rather than later in some European markets.

French tech blog iPhon.fr reports today that an iPhone user in France discovered screens on his new Apple Watch and iPhone XS Max overnight inviting him to set up Apple Pay Cash using a credit card issued by a French bank. Similar reports are also coming in from Apple device owners in other European countries. 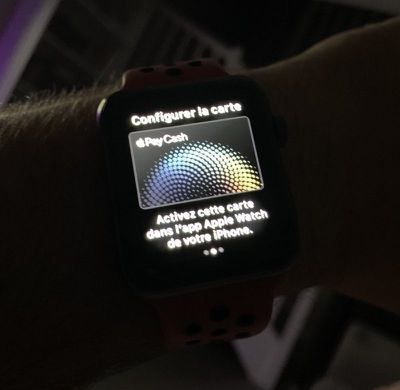 Apple Pay Cash arrived on iOS devices in December 2017, although it's currently only officially available to users in the United States. The system allows for quick person-to-person money transfers, much like competing services Square Cash and Venmo.

In addition to the setup screens shared over social media, an Apple support page for Apple Pay Cash has been discovered localized in German that went live on Apple's servers on September 30.

When new users receive money for the first time, the funds are added to their new Apple Pay Cash card once they accept Apple's terms. The card's funds can then be used to make purchases using Apple Pay in stores, in apps, and on supported websites, or withdrawn to a bank account within one to three business days.

When Apple Pay Cash does arrive outside the U.S., Apple device owners wanting to use it will need an iPhone 6 and later, iPhone SE, any iPad Pro model, a fifth-generation iPad, iPad Air 2, or iPad mini 3 running iOS 11.2 or later.

Update: One MacRumors reader has found a link to an Apple Pay Cash support page localized for Austria, while support pages have also been discovered for Italy, Poland, Sweden, and Russia.

Apple Pay Cash, is not yet available.
Score: 10 Votes (Like | Disagree)

If Europe means France, UK and a select few others only then thanks but it doesn't work for me.
Maybe it's because there's a similar service here called MB WAY? I rather use Apple's but they don't seem interested in making the service available EVERYWHERE.

Probably to do with needing banking licenses in every country too then. Logically, they are going to focus on the biggest markets first. Which means us Dutchies will often come last.
Score: 5 Votes (Like | Disagree)

Where is Canada in all this?

It wasn't in Europe last time I looked. :D
Score: 4 Votes (Like | Disagree)

Hopefully it also comes to the U.K...

Read the headline again and think about your comment. o_O
Score: 3 Votes (Like | Disagree)
Read All Comments