The iPhone XS Max with 256GB of storage costs an estimated $443 to make, according to estimates shared by TechInsights in a teardown of the new device. At $443, the iPhone XS Max components are nearly $50 more expensive than the estimated $395.44 component cost of the 64GB iPhone X.

TechInsight's component cost breakdown suggests the iPhone XS Max display is the most expensive component in the device at $80.50, while the A12 chip and modems are the second most expensive, at $72. 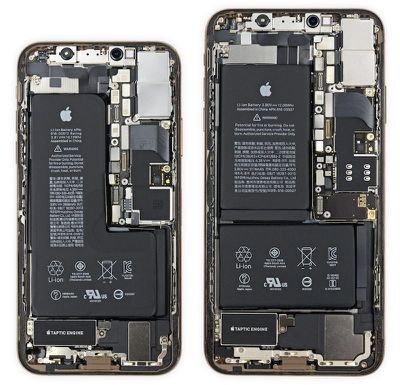 iPhone XS and iPhone XS Max internals, via iFixit
Storage, priced at $64 is the third most expensive component, while other expensive parts include the cameras at $44 and the housing and mechanical components at $55.

The iPhone XS Max housing, display, battery, and memory are all more expensive than similar components in the iPhone X, largely due to the size increase in the new 6.5-inch device. The housing, for example, is larger and heavier, while the display is also larger.

In a statement provided to Reuters, Al Cowsky, who oversees the cost analysis at TechInsights, said Apple took out components worth up to $10, cutting the cost of the iPhone XS Max display to $80.

Component cost estimates from companies like TechInsights only took at the pricing of raw components and do not take into account other iPhone manufacturing expenses like research and development, software creation, advertising, and distribution.

TechInsights itself warns that its cost estimates are compiled using the information available at the time of the initial teardown, with "some assumptions" made where concrete data is not yet available. The company plans to continue to refine its estimate over time.

Last year, when the iPhone X was first released, TechInsights estimated the component cost at $357.50, a number that has now gone up to an estimated $395.44, so there can be quite a bit of variance in these early guesses.

While interesting, device cost estimates are not an accurate measurement of Apple's overall profit margin for the iPhone XS Max, nor do they offer a clear picture of the overall cost of creating a new smartphone.

Back in 2015, Apple CEO Tim Cook said that cost breakdowns for devices are not reflective of actual costs. "I've never seen one that is anywhere close to being accurate," he said.

We have revised our initial estimates of the component cost of the iPhone Xs Max from $443.00 to $453.00, based on new information about the 3D touch system. Our initial review of the phone indicated that some of the 3D components that were included in last year’s iPhone X had been removed, but further investigation revealed this not to be the case. We can confirm that the iPhone Xs Max includes the same Broadcom BCM15951 3D touch controller used in the iPhone X.

The title of the post has been updated to reflect TechInsights' new pricing estimate.

TimUSCA
Here we go with the armchair business experts telling us what an appropriate markup is and isn't. Just remember that there's a LOT more cost involved in making a device like this than just the materials used. Engineering, marketing, packaging, retail stores, etc. And yes... even a markup because they wouldn't be making phones at all without a profit.
Score: 35 Votes (Like | Disagree)

alexnyc8
Vote with your wallets people. If you go out and buy one on day one Apple will continue raising the prices.
The people here who attempt to justify Apple price increases are funny nevertheless. Yes Apple can charge whatever the market will bare (at least as long as there is 0% financing subsidy such as common in US), luckily for me though, my 7+ works like a charm (previous one was a 3GS) and i intend to keep it until it falls apart :)
Score: 30 Votes (Like | Disagree)

DNichter
Gotta love that markup. Wish I could get into a business like that.
Score: 9 Votes (Like | Disagree)

And how does any of those expenses change when bumping the memory from 64G to 512G and then marking the phone up $350! for memory that costs them an extra $100!? Nothing wrong with making a profit, but they need to stop acting like it's "all about the customer".
Score: 9 Votes (Like | Disagree)
Read All Comments

Friday November 25, 2022 2:58 am PST by Sami Fathi
An Apple engineer has addressed the lack of lossless audio support in the second-generation AirPods Pro in a new interview. Current Bluetooth technology in the AirPods lineup means that Apple's audio products do not support Apple Music Lossless audio. Apple has previously hinted that it may develop its own codec and connectivity standard that builds on AirPlay and supports higher quality...
Read Full Article • 167 comments