Amazon held a big hardware event today at The Seattle Spheres, located at Amazon's headquarters campus in Washington state. The event was notable for Amazon, with senior vice president of Amazon Devices Dave Limp stating that it marked the largest number of devices and features that Amazon has ever debuted in one day.

The first product unveiling was a new and upgraded Echo Dot, which includes a brand new mic array for better performance. The company says the driver is much larger -- increasing from 1.1" to a 1.6" driver -- resulting in more powerful sound with lower distortion, enhanced bass reproduction, and increased overall max volume. 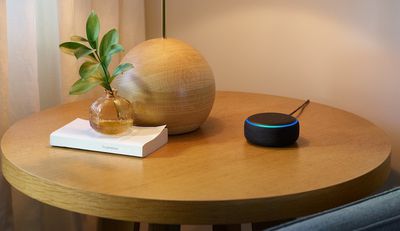 Echo Dot
Through all of the upgrades, Echo Dot's footprint still hasn't increased and the price will remain at $49.99, just like previous generations. The new Echo Dot ships in October, and pre-orders go up today.

There's also a new mainline Echo device, the new Echo Plus. This generation has more powerful sound with stronger bass and clearer playback. There's a new equalizer feature that lets you use your voice to adjust the bass and treble through Alexa, a built-in smart home hub so you can set up devices by stating "Alexa, discover my devices," and an integrated temperature sensor so you can trigger routines based on how cool or hot the room is.

Image via The Verge
Echo Plus will cost $149.99 and is up for pre-order today before its October launch.

A new Echo Show has been completely redesigned with a larger screen, included smart home hub, and improved sound quality. There are dual, side-firing 2" Neodymium drivers, a passive bass radiator and Dolby processing for stereo sound; a 10-inch HD display that's twice the display area of the original Echo Show; and an 8-mic array. The new Echo Show will cost $229.99, and can be pre-ordered today to arrive next month.

Echo Show
Next, the company announced the Echo Input, which is the first Echo device without a speaker. Echo Input adds Alexa voice controls to another Bluetooth speaker via a 3.5mm audio cable or Bluetooth. The device has a four-microphone array, support Alexa commands, and is just 12.5mm tall. Echo Input will launch later this year for $34.99.

Echo Sub
Amazon also revealed the Echo Sub (via The Verge), which is aimed at adding deep bass to an existing Echo device ecosystem through stereo pairing. The 100W subwoofer can be paired with two compatible Echo devices (to get a 2.1 stereo system) and will be controlled via the Alexa mobile app or your voice. Echo Sub is up for pre-order today and will ship later this month for $129.99.

To add even more controls to an Amazon ecosystem, the Echo Link is designed to connect to a receiver or amplifier and includes multiple digital and analog inputs and outputs. This ensures compatibility with existing stereo equipment, allowing you to control music selection, volume, and multi-room playback on your stereo with your Echo or the Alexa app. Echo Link costs $199.99 and will launch later in the year.

Echo Link
Amazon debuted another stereo amplifier called the Echo Link Amp, and this one has a built-in 60W 2-channel amplifier, multiple digital and analog inputs and outputs for connectivity with existing equipment, and the expected music playback controls. The Echo Link Amp will cost $299.99 and also launches later this year. It's important to note that neither the Echo Link or Echo Link Amp include onboard microphones for Alexa controls, since they're designed to connect to other Echo speakers for that functionality.

Amazon Smart Plug
The company revealed its first foray into the smart plug category with the Amazon Smart Plug, which is the first device to ship with Amazon's new Wi-Fi Simple Setup feature that was also announced today. Like existing smart plugs, you can use the Amazon Smart Plug to turn older devices (with basic on/off settings) into smart home gadgets that can be controlled from your smartphone or through a smart assistant. Amazon's option will be $24.99 and is up for pre-order today ahead of an October launch.

For the vehicle market, Amazon revealed the Echo Auto, a small device that has an eight-microphone array that can pick up Alexa commands through noisy car environments. Echo Auto isn't a full infotainment system in itself, but instead acts as a sort of dongle that you can plug into an existing system to gain Alexa skills in your car.

Image via TechCrunch
Amazon announced as many as 70 total devices, updates, and features today, so we've quickly rounded up some of these below:

If you're interested, all of the products up for pre-order today should begin appearing on Amazon's Echo and Alexa page soon.

kerpow69
The microwave is particularly stupid. You still have to walk up to it to put your food in. At that point how hard is it to punch in 30 seconds?
Score: 21 Votes (Like | Disagree)

RickInHouston
Boy, at this stage of the game apple better make their own everything because you guys don't want it if it doesn't have an apple logo on it.
Score: 20 Votes (Like | Disagree)

The Game 161
Does it still send private text messages to your contacts without your knowledge though?
Score: 15 Votes (Like | Disagree)

tobefirst ⚽️
Well, I guess I'll be the first to say that I'm excited about some of these products. A better sounding echo dot? A larger screen echo show? A bridge to my stereo receiver? Yes, please. I also like the idea of integrating Alexa with things that would just be around the house, like the wall clock. Instead of having to have a dot in that room, I could just put a clock up.
Score: 13 Votes (Like | Disagree)

chrisdazzo
Privacy- and security-wise, I still don't want an Echo or Ring in my house... but that's just me.
Score: 12 Votes (Like | Disagree)

The microwave is particularly stupid. You still have to walk up to it to put your food in. At that point how hard is it to punch in 30 seconds?

Incredibly hard if you have a handicap
Score: 11 Votes (Like | Disagree)
Read All Comments