Code in the iOS 12.1 beta released this morning suggests Face ID has built-in support for landscape orientation, according to information shared by developer Steven Troughton-Smith. 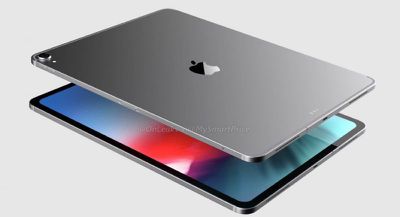 A rendering of the upcoming iPad Pro said to be based on leaked CAD drawings
According to Troughton-Smith, landscape support for Face ID has likely been built into the update for upcoming iPad Pro models that are expected to offer Face ID.

Face ID has support for landscape orientation (presumably for iPad only), and iOS 12.1 seems to care a lot more about whether an external display is connected (perhaps due to iPad USB-C rumors; it won't have the Lighting HDMI adapter as an intermediary for video-out) — Steve Troughton-Smith (@stroughtonsmith) September 18, 2018

Troughton-Smith says that landscape Face ID requires a different alignment for the front-facing sensors of the TrueDepth camera system, which is why it won't be available for iPhone models that have Face ID.

From what I gather, landscape Face ID would require a realignment of the front-facing sensors, so you won't see it on existing hardware https://t.co/gVyB4Hz3pW — Steve Troughton-Smith (@stroughtonsmith) September 18, 2018

Previous iPad rumors have also suggested Apple would introduce Face ID support for landscape orientation specifically for the new iPad Pro models, because being able to unlock only in portrait mode would be inconvenient with a larger tablet form factor that's most often used in a horizontal orientation.

Right now, Face ID on the iPhone X and the new iPhone XS and XS Max devices works only in portrait mode, with the devices unable to recognize a face when held in landscape mode.

There has been some confusion over how Apple will implement Face ID in the iPad Pro models, though, as some rumors have pointed towards the inclusion of a new mystery port that's supposedly a Smart Connector located at the back of the device in leaked cases and CAD drawings.

A rendering of the upcoming iPad Pro said to be based on leaked CAD drawings
According to Japanese site Mac Otakara, which has somewhat of a mixed track record when it comes to rumors, the Smart Connector allegedly works with a new vertically oriented Smart Keyboard. Mac Otakara believes Face ID in the iPad Pro will work only in vertical orientation, but both today's information and prior hints of horizontal Face ID support suggest that's inaccurate.

Troughton-Smith shared a few other tidbits he found in the beta. There appears to be code to support an upcoming change to MFi game controllers that will offer up compatibility with clickable thumb sticks, and iOS 12.1 "seems to care a lot more about whether an external display is connected," which could be related to rumors of a switch from Lightning to USB-C.

Apple's iPad Pro models are rumored to feature edge-to-edge displays with no Home button, no headphone jack, and a USB-C port instead of a Lightning port. We're expecting Apple to introduce the new iPad Pros before the end of the year, perhaps at an upcoming event in October.

BornAgainMac
It will take a lot of courage for Apple to put a USB-C port on it.
Score: 25 Votes (Like | Disagree)

Armchair engineer, don't you think Apple would have been doing just that if it's that easy.

Right, like they couldn't engineer the X MAX last year? They held off on the bigger screen so people would have something to upgrade to. I'm a marketer, and Apple is a marketing company.
Score: 21 Votes (Like | Disagree)

Return Zero
Not being possible with the existing iPhone X hardware doesn't make sense to me... It's infrared light, dot projector, and infrared camera, all operating in flood/wide-angle. The field of effectiveness seems broad enough to work in landscape. What exactly would need realignment that couldn't simply be accounted for in software?
Score: 14 Votes (Like | Disagree)

Hardware that they clearly could have included in the XS, XS Max, and the XR.

Armchair engineer, don't you think Apple would have been doing just that if it's that easy.
Score: 13 Votes (Like | Disagree)

iapplelove
Apple already has my money for one of these.

I just haven’t told my ancient iPad Air yet.

Saturday February 4, 2023 1:30 am PST by Hartley Charlton
Google's Chromium developers are working on an experimental web browser for iOS that would break Apple's browser engine restrictions, The Register reports. The experimental browser, which is being actively pursued by developers, uses Google's Blink engine. Yet if Google attempted to release it on the App Store, it would not pass Apple's App Review process. Apple's App Store rules dictate...
Read Full Article • 183 comments