Apple is facing a series of leaks in the hours ahead of its "Gather Round" event at Apple Park in Cupertino, California, and this time information about the new version of Apple Watch has been revealed. According to AllThingsHow, Apple udpated its sitemap files ahead of the event, which included links to Apple Watch in new 40mm and 44mm sizes. 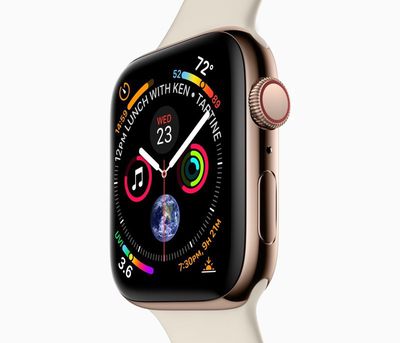 These are believed to be the new Apple Watch models about to be announced later today, although they don't carry a "Series 4" designation in the sitemap and are simply called "Apple Watch." The sizes include both GPS and GPS + Cellular configurations, and include the colors Silver, Space Gray, and Gold.

The 40mm and 44mm sizes roughly align with a prediction made by analyst Ming-Chi Kuo in July, who stated Apple would reveal two models measuring in at around 39.9mm and 45.2mm.

The upcoming Apple Watch's big new feature will be a display that's 15 percent larger, thanks to reduced bezels and likely the slightly increased case size. In a leak a few weeks back, we got a glimpse at a new watch face for Apple Watch, including one that had space for as many as eight complications.

d0minick
instant buy if there is a ecg monitor. im not even excited for the phones for the first time in a LONG time. The watch though, is really coming in to its own.
Score: 12 Votes (Like | Disagree)

Godzilla71
My wrist is ready!
Score: 8 Votes (Like | Disagree)

Bozley0621
This deflated my excitement a little bit. I have small wrists and the 38mm already looks chunky. Hopefully this means they are somewhat thinner.
Score: 6 Votes (Like | Disagree)

Wait. So our old bands won’t work with the new watch?

I think they will be, but You will find out in matter of hours.
Score: 5 Votes (Like | Disagree)

ondert
Fingers crossed for ECG support. Also, keeping the current bands compatible should be a must.
Score: 5 Votes (Like | Disagree)

Wait. So our old bands won’t work with the new watch?

On the plus side quite alot of retailers will be selling off official straps that have outdated packaging.
Score: 4 Votes (Like | Disagree)
Read All Comments