Beats by Dr. Dre, Apple's well-known headphones brand, today announced a marketing and merchandising partnership with the NBA, which will make it the official headphone, wireless speaker, and audio partner of the NBA, and sister associations WNBA, NBA G League, and USA Basketball as of October 2018.

Under the terms of the partnership, which will span multiple years, Beats will establish separate deals with NBA teams to launch audio products for NBA fans, including NBA team-branded headphones. 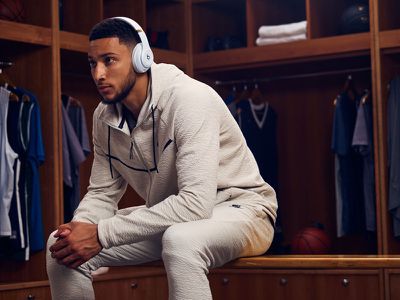 Luke Woods, Beats by Dr. Dre president, said that the company's partnership with NBA is the "perfect alignment," an unsurprising statement given that Beats has long used major athletes to advertise its headphones, even prior to the purchase by Apple.

"The NBA and its players have long been significant drivers of global culture. Basketball, music, and style speak as one voice: Julius Erving became a style icon, Allen Iverson cemented hip hop's place on and off the court and LeBron James is breaking new music every day... the list goes on and on," said Luke Wood, President of Beats by Dr. Dre. "This partnership with the NBA is the perfect alignment for Beats. It feels like coming home."

In addition to developing NBA-themed headphones for fans, Beats also plans to provide headphones to players and advertise during major events like the NBA All-Star, NBA Draft, international games, WNBA games, and more.

The Beats NBA partnership will kick off in October, which is when the 2018-2019 NBA season will begin.

keysofanxiety
I was never blown away by the Beats brand and their artificially heavy bass. Don't get me wrong: they're not as terrible as people make out. On the Internet everybody's an audiophile it seems.

But after the weights they put in the headphones to make them heavier and feel more substantial/expensive, whilst the components inside were crappy, that sealed the deal for me. They're not bad (e.g., if you get them free with a Mac purchase you're unlikely to be dissatisfied), but not worth anywhere near the price.
Score: 7 Votes (Like | Disagree)

AngerDanger
It has always been my dream to play basketball professionally. Initially, I worried that my lack of skill and even a single day of practice would pose somewhat of an obstacle, but now all I have to do to be like my heroes is buy a pair of headphones. Thanks Beats®©™! :)

iMi
Next year's Beats will be $100 more. Someone has to pay for the endorsements, people. The brand won't make itself an even more expensive and valuable thing all by itself.

All joking aside, I think many of you with comments suggesting beats are "crappy" should really consider taking a second look. The new Studio3 and BeatsX are both fantastic. I enjoy them a lot. Less bass, more clarity on both headsets. The Studio is the most improve from previous generation.

I tried compatible Bose headset and thought Beats were better. I tried the new Sony headset and while I liked that one better, the lack of W1 chip made it a second choice again. So, I don't think they are crapy. Plus, sound quality is super subjective.