Friday August 31, 2018 4:04 pm PDT by Juli Clover
Apple is testing its self-driving vehicles in a number of Lexus SUVs out on the roads of Cupertino, and on August 24, one of those vehicles was involved in an accident.

Apple is required to disclose autonomous vehicle collisions to the California DMV, and the information on the accident was published on the DMV’s website. 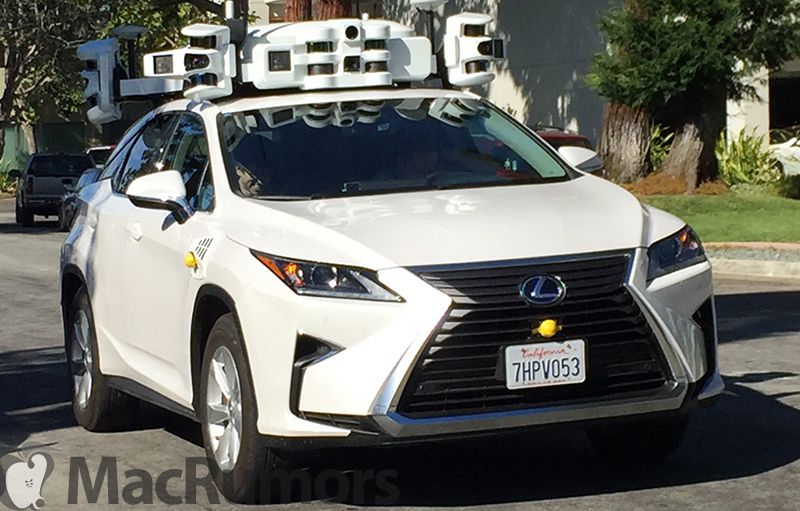 According to the accident details, the vehicle in question was in autonomous mode at the time, and sustained moderate damage in the crash, but it does not appear that Apple was at fault for the collision. From the accident report:

On August 24th at 2:58 p.m., an Apple vehicle in autonomous mode was rear-ended while preparing to merge onto Lawrence Expressway South from Kifer Road. The Apple test vehicle was traveling less than 1 mph waiting for a safe gap to complete the merge when a 2016 Nissan Leaf contacted the Apple test vehicle at approximately 15 mph. Both vehicles sustained damage and no injuries were reported by either party.

Apple has been testing its self-driving software in Lexus RX450h SUVs in Cupertino, California and surrounding areas since early 2017, but this is the first time an Apple vehicle has been involved in a crash.

Apple’s test vehicles are outfitted with a host of sensors and cameras, and while they are autonomous, each one has a pair of drivers inside. At the current time, Apple is testing its software in more than 60 vehicles.

It’s not yet clear what Apple plans to do with its self-driving software, but it could be added to existing cars and there are still rumors suggesting Apple is working on its own Apple-branded vehicle that could come out by 2025.

Apple is also working on a self-driving shuttle service called “PAIL,” an acronym for “Palo Alto to Infinite Loop.” The shuttle program will transport employees between Apple’s offices in Silicon Valley.

Swampthing
I think some people aren’t reading the article. The Apple car did nothing wrong. It was the Nissan Leaf that collided into the rear because it was following too closely. So if you were claiming injuries while driving the Nissan Leaf, you’re on your own!
Rating: 38 Votes

Whoa, what am I missing in the article. Where does it say the Leaf was following too closely? Apparently things have changed since I went to driving school but you never stop when merging onto a highway (unless there’s a STOP sign) <1 mph would be considered a stop.

Thank god I live in MA where people know how to drive. Like they say on Big Brother, "Expect the unexpected". No problems.


In driving school, you learn that the vehicle who rear ends another is at fault no matter what. If you hit someone, you get a ticket for following too closely. There are only two ways to rear end someone -- following too closely, or being distracted and not hitting the brake fast enough.

The article said the Apple car was waiting for a gap in highway traffic while trying to merge. You can't get onto the highway by putting your car inside of another car, that's not how physics work; you have to wait for a gap.

People are on their phones too much these days. The driver of the Leaf was probably texting.
Rating: 37 Votes

boast
Humans are dangerous. We need to get them away from behind the wheel as fast as we can.
Rating: 32 Votes

batting1000
“Waiting for a safe gap to complete the merge...”

Wow, this thing is already better than humans at driving.
Rating: 31 Votes

How many thousand kilometers did they do before having this first accident?
They're in alpha and they're already on the way to be better than us humans...

And all it was doing was making a legal merge. And some brainiac, probably on their phone, just smacks into it...
Rating: 25 Votes

BigMcGuire
Saw one of these self driving cars on the freeway (Apple I believe?) yesterday was shocked to see people driving in such a way to antagonize the vehicle intentionally. The person behind was inches off their bumper. I guess some people like to see the world burn.
Rating: 24 Votes

Relentless Power
This is the most relevant the Nissan Leaf has Ever been, being involved in a collision with the Apple autonomous vehicle.
Rating: 24 Votes

quietstormSD
That’s the problem with self driving cars. They are made to follow rules. Hence the Apple autonomous car going less than 1 mph to find a gap to merge into another lane. Everyone knows you gotta stick your nose into the other lane and force yourself in there!
Rating: 21 Votes