Bloomberg's Mark Gurman and Debby Wu today previewed details about Apple's widely rumored trio of 2018 iPhones. Towards the end of the report, there are also a few details about the Apple Watch and iPad that we've highlighted below. 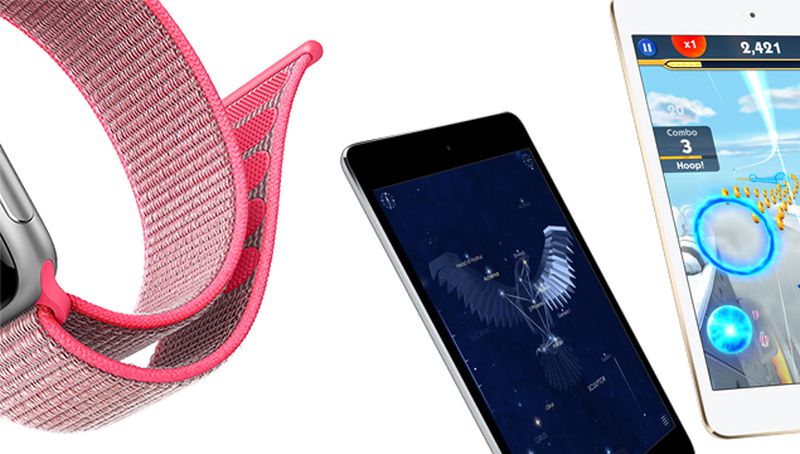 The first noteworthy tidbit is that Apple Watch Series 4 models will be compatible with existing bands, as they are said to have a similar physical size as Series 3 models and earlier. Gurman already said as much earlier this year, but there were some lingering concerns from MacRumors readers in our discussion forums.

Apple Watch Series 4 models are still expected to have up to 15 percent larger displays, as a result of slimmer bezels around the screen. They're also expected to have slightly longer battery life, along with new health and fitness features.

The second tidbit worth singling out is that the iPad mini won't be updated this year, according to Gurman. That information corroborates DigiTimes, which recently reported that "Apple so far has no further plan for the iPad mini series," which hasn't been refreshed since the iPad mini 4 launched in September 2015.

Apple's focus on the lower-cost 9.7-inch iPad may result in the iPad mini line being discontinued eventually, although Gurman hasn't specified.

We're likely just a few weeks away from Apple's usual September event at Steve Jobs Theater, with invites to the media likely to be issued this week. In addition to the new iPhones and Apple Watch Series 4 models, Apple is expected to unveil two new iPad Pros with Face ID, new AirPods, and AirPower pricing and availability.

iPad mini: makes sense. With the new larger plus iPhone, can’t see much of a need.

Don't underestimate the number of children who use an iPad. And when it comes to parents footing the bill, the cheaper the better. There's a huge market for children that use iOS but certainly don't need an iPhone.
Score: 11 Votes (Like | Disagree)

No. The plus sized phones and the mini are completely different sizes. They do not compare at all. I have both and love the mini. Mine is old and I don’t want a full sized iPad.

Especially true now that the Plus aspect ratio is 19.5:9, which makes it all but unusable for most mini use cases. iPad mini is almost twice as large as the soon to be released X Plus:

piker944
Whew! Ordering the 4 to replace my original Apple Watch and definitely wasn't wanting to purchase all new bands.
Score: 6 Votes (Like | Disagree)

The iPad Mini either does not sell well (and Apple believes would not sell any better with a spec bump) or it sells well enough as-is that spec-bumping it would likely not boost sales significantly and would erode margins (if kept at the same price). So it will continue to limp along as-is.

The mini was the best selling ipad while Apple kept up with updates. Their response to those sales numbers was to not update it further, and year after year, let sales diminish. Eventually they'll be able to point to low sales as reason to discontinue it, but it's entirely a choice they've made regardless of sales. Instead of updating it, or adding Pencil support, they've created several new larger, cheaper ipads and pushed those instead, entirely missing the appeal and utility of the Mini, like everyone else in this thread who thinks a plus sized iPhone is an equivalent device. It is not.

It's somewhat obvious they never looked into how people use minis, and mistakenly regarded the model as the budget ipad, then sought to make more profitable replacements for it that were all-around cheaper to build than a full featured iPad squeezed into the more convenient 7.9" frame. Add it to the Macbook Air, the Macbook Pro 17", the Air Ex/TC, Cinema Display line, etc. The most useful & popular devices Apple built, all on the fire.

No. The plus sized phones and the mini are completely different sizes. They do not compare at all. I have both and love the mini. Mine is old and I don’t want a full sized iPad.
Score: 5 Votes (Like | Disagree)

Tuesday April 7, 2020 10:06 am PDT by Juli Clover
Apple today released iOS and iPadOS 13.4.1, minor updates that come two weeks after the release of iOS and iPadOS 13.4, major updates that introduced iCloud Folder Sharing, a new Mail toolbar, trackpad support for the iPad, and more. The iOS and ‌iPadOS‌ 13.4.1 updates are available on all eligible devices over-the-air in the Settings app. To access the updates, go to Settings > General...
Read Full Article • 74 comments