The latest Apple-related auction will kick off on September 25, offering bidders the chance to get their hands on a rare Apple-1 computer. On sale by RR Auction, the Apple-1 is fully operational and one of around 70 Apple-1 computers that remain of the first 200 built by Steve Jobs and Steve Wozniak in 1976.

Executive vice president at RR Auction, Bobby Livingston, says that the Apple-1 originates from a person who purchased it at The Byte Shop, the store where Jobs and Wozniak originally sold the computers for $666.66. The owner learned BASIC on the computer, wrote small programs, and decided to hold onto the Apple-1 after it became outdated, "realizing it could one day be a piece of computing history." He then tried to sell the Apple-1 to Wozniak in 1982 for $10,000, which "went unanswered." 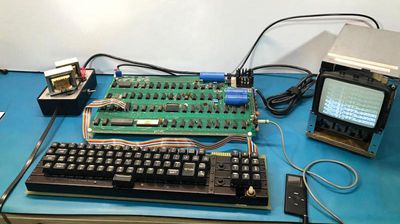 This Apple-1 computer was restored to its original, operational state in June 2018 by Apple-1 expert Corey Cohen, and a video of it running and functioning is available upon request. A comprehensive, technical condition report prepared by Cohen is available to qualified bidders; he evaluates the current condition of the unit as 8.5/10. The most remarkable aspect of this Apple-1 computer is that it is documented to be fully operational: the system was operated without fault for approximately eight hours in a comprehensive test.

Apple-1 computers have been up for auction a few times in the past few years, and the record auction price for an Apple-1 was established in 2016 when one of the computers sold for $815,000. That computer was the "Celebration" Apple-1 and was very rare due to its blank "green" PCB board that was never sold to the public and was not a part of a known production run. Slightly more common, publicly-sold units have recently sold for $130,000.

Additionally, the auction is being promoted with a unique digital "DNA" scan, performed by Invaluable with technology built by Artmyn. This technology scans artwork and objects like the Apple-1, capturing "tens of thousands of photographs" using various light sources and spectrums, including UV lights. The scan generates a "5D interactive file" and an immersive video that lets owners, auction houses, consignors, and buyers see greatly detailed angles, views, and textures for the scanned objects.

The video for the Apple-1 can be seen on Vimeo.


“We couldn’t be more excited about the sale of this historic piece of technology,” said Invaluable CEO Rob Weisberg. “The innovative scanning technology we’re showcasing is a giant step towards greater transparency in the art and collectibles market that we believe will increase buyer confidence in the online art market. To showcase it with an Apple-1 is just incredible and fitting.”

In the case of the Apple-1, the scan will allow a 5D look at the iconic desktop, offering zeroed-in views of distinguishing details on the top and bottom of the piece.

keysofanxiety
The first true "Pro" machine Apple made. These days you can't even solder in your own capacitors. Thanks, Tim.
Score: 3 Votes (Like | Disagree)

Give the great and powerful Woz his due and proper.
Score: 2 Votes (Like | Disagree)

They even put them in cases now to make upgrades harder!

I know, what a joke. I should have the PRO option to craft my own wooden case for it.
Score: 2 Votes (Like | Disagree)

Give the great and powerful Woz his due and proper.

With all due respect to the great Woz, Jobs did actually build some of these. And was involved in financing the production just as Woz was.
Score: 2 Votes (Like | Disagree)

The first true "Pro" machine Apple made. These days you can't even solder in your own capacitors. Thanks, Tim.

They even put them in cases now to make upgrades harder!
Score: 2 Votes (Like | Disagree)

WestonHarvey1
What's with the weird fake version of "Thus Spake Zarathustra"? The music is public domain, so why record some weird bastard version of it?
Score: 2 Votes (Like | Disagree)
Read All Comments