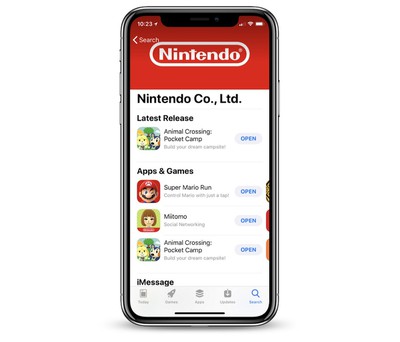 As long as the upfront prices aren't too high, such "premium" games would create a more sustainable business model over the long term, Miyamoto says, seemingly referencing video games across mobile, console, and PC. The Super Mario creator made the comments during the Computer Entertainment Developers Conference on Wednesday in Yokohama, Japan.

“We’re lucky to have such a giant market, so our thinking is, if we can deliver games at reasonable prices to as many people as possible, we will see big profits,” Miyamoto said at the Computer Entertainment Developers Conference (CEDEC) on Wednesday in Yokohama, Japan.

Nintendo has tried both models on smartphones: in "Super Mario Run" it charged an upfront price of $9.99 to gain access to the full game, and in "Animal Crossing: Pocket Camp" and "Fire Emblem Heroes" it launched the games for free, with numerous opportunities for in-game purchases. Nintendo has previously said it prefers the pay-once structure of "Super Mario Run," but it still released two free-to-play apps in the year after that game launched.

Additionally, even one year after launch "Super Mario Run" had yet to reach an "acceptable profit point," while stories about revenue from the freemium games were consistently more positive. Miyamoto admits that the "Super Mario Run" model hasn't exactly been a success, but says the company will "continue pushing" the pay-once model forward in an effort to avoid freemium mobile games and promote a healthier, more "comfortable" development environment in the industry.

“I can’t say that our fixed-cost model has really been a success,” the usually candid Miyamoto said. “But we’re going to continue pushing it forward until it becomes entrenched. That way everyone can develop games in a comfortable environment. By focusing on bringing games to the widest range of people possible, we can continue boosting our mobile game business.”

Next, Nintendo will launch "Dragalia Lost" on iOS and Android in North America and Europe later this year, through a partnership with Japanese mobile developer Cygames. The payment structure of the game is unknown, but previous apps by Cygames have been reliant upon Japan's popular "gacha" system, which encourages players to spend real money on in-game currency that they can use to unlock random items.

Nintendo's new president, Shuntaro Furukawa, has said that mobile gaming will be a priority of his time leading the company, with plans to increase the output of smartphone games and launch a singular "game-changing" app that surges in popularity, akin to "Pokémon Go."

jedwards87
Please do. I hate freemium and refuse to play ones that are.
Score: 19 Votes (Like | Disagree)

But if you do pay once for a mobile game, at least allow the game to function without the need for an internet connection!
Score: 15 Votes (Like | Disagree)

rjp1
After the way they didn’t allow family sharing for Mario Run - I will not buy any more games from them.
Score: 5 Votes (Like | Disagree)

brentsg
Between the micro transactions and the glut, I ignored the App Store years ago. I grab something like Vudu that I might need, but the days of buying neat new apps are loooong gone.
Score: 4 Votes (Like | Disagree)

ArtOfWarfare
Eh. The Switch made mobile gaming irrelevant for me. Anytime I'm available to play a game on my phone, I'd much rather play it on my Switch.

If I only have one hand available, I'd rather read news or facebook than try playing a game.
Score: 4 Votes (Like | Disagree)

After the way they didn’t allow family sharing for Mario Run - I will not buy any more games from them.

That's fine. If you want them to develop a full (and new, not ported) quality game and charge you 2-10 dollars for group licenses, you aren't their target customer anyway. Good luck roping any other major game studio into it as well.
[doublepost=1535034936][/doublepost]

Eh. The Switch made mobile gaming irrelevant for me. Anytime I'm available to play a game on my phone, I'd much rather play it on my Switch.

If I only have one hand available, I'd rather read news or facebook than try playing a game.

Totally agree. Octopath Traveler could be on iOS i suppose, but the Switch experience would be very tough to beat. I thought Nintendo was about to die, and I'm thrilled they put out a system that was.... let's just say I wasn't convinced it would work.... but then backed it up with some of the best games I've played in the past 10 years (Odyssey, BotW, Xenoblade Chron 2). I find the switch experience (aside from the battery) far superior to any iOS gaming I've done.
Score: 4 Votes (Like | Disagree)
Read All Comments