The U.S. House Energy and Commerce Committee this morning sent letters to Apple and Google parent company Alphabet to ask 16 multi-part questions about how the companies handle customer data, according to a press release.

The letter to Apple [PDF] cites recent media reports as the reason for the inquiry, referencing November news suggesting Android collects extensive user location data even when location services are disabled along with reports that smartphones collect and store "non-triggered" audio data from user conversations near a smartphone to hear a trigger phrase such as "Ok Google" or "Hey Siri." 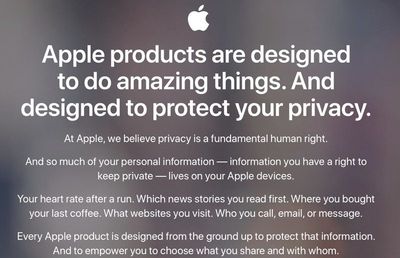 While both of these reports were focused on Android, the House wants to know if Apple has similar practices, collecting location data when location services, WiFi, and Bluetooth are disabled or gathering "non-triggered" voice data from customers and sharing it with third-party sources.

A summary of some of the questions are below, with the complete list available in a PDF of the letter shared by the committee.

The letter goes on to request Apple's policies for data collection via the microphone, Bluetooth, WiFi, and cellular networking capabilities, along with Apple's policies pertaining to third-party access and use of data collected by the microphone. It also asks whether Apple has suspended or banned companies for violating its App Store rules, requesting specific examples and whether users had been notified their data was misused when the developer was banned.

The House Energy and Commerce Committee asks Apple to make arrangements to provide a briefing on the topics listed in the letter, but it does not provide a timeline for when Apple needs to respond. Apple generally responds to these requests in a prompt manner, however.

Privacy is at the forefront of many features Apple implements, and the company is careful to always outline the privacy protections that have been added when introducing new functionality. When introducing new Photos features in iOS 12 that allow for improved search and sharing suggestions, for example, Apple was quick to point out that these features are all on-device.

Apple executives have said several times that Apple customers are not the company's product, and Apple CEO Tim Cook has maintained that privacy is a fundamental human right. From a recent interview:

To me, and we feel this very deeply, we think privacy is a fundamental human right. So that is the angle that we look at it. Privacy from an American point of view is one of these key civil liberties that define what it is to be American.

Cook has also said that people are not fully aware of how their data is being used and who has access to it, a problem that "needs to be addressed."

"The ability of anyone to know what you've been browsing about for years, who your contacts are, who their contacts are, things you like and dislike and every intimate detail of your life - from my own point of view it shouldn't exist."

Apple is continually introducing new privacy tools and protections for customers. Both macOS Mojave and iOS 12 include security and privacy improvements designed to better protect users, with additional tracking protection in Safari on both operating systems and extended privacy protections in Mojave.

PotatoLeekSoup
Google should be worried, not Apple.
Score: 17 Votes (Like | Disagree)

now i see it
Since android is basically another data mining extension of Alphabet/Google, they're gunna have some explaining to do.
Score: 14 Votes (Like | Disagree)

AndyUnderscoreR
"Do Apple's iPhone devices have the capability to listen to consumers without a clear, unambiguous audio trigger?"

How stupid are these people? Do they seriously expect a phone to hear a "clear, unambiguous audio trigger" without listening for one?
Score: 13 Votes (Like | Disagree)

I'd bet a years wages that all that rubbish about keeping your data private is a facade. Guess what, they'll buy what they can't get from the iPhone, from data miners/advertisers anyway.

Given a choice between a company that we know does all these things for advertising (google), a company that at least says it doesn't (apple), and having no real way of knowing which is being honest or not, I know which company I'd rather take the gamble on given there are only 2 smartphones OS to choose.
Score: 9 Votes (Like | Disagree)

thisisnotmyname
I don't expect Apple is sweating this conversation at all. I would think they welcome it to further differentiate their focus on privacy from the competition.
Score: 8 Votes (Like | Disagree)
Read All Comments