Apple CEO Tim Cook this evening sat down for an exclusive interview with CNN's Laurie Segall, where he discussed everything from his iPhone usage habits to the importance of privacy.

On the subject of device usage, Cook says that when he started using the new Screen Time feature built into iOS 12, he found he was spending too much time on the iPhone. "I found I was spending a lot more time than I should," he said. "I thought I was fairly disciplined about this. And I was wrong." 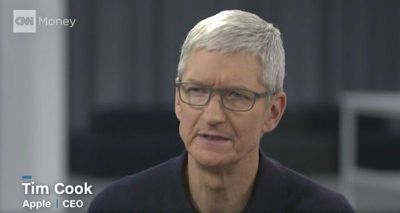 Cook said that Apple is aiming to provide the tools to consumers to let them make their own decisions about device usage, and what's considered too much will vary from person to person. He said that while Apple wants customers to be "incredibly satisfied and empowered," it's not the goal to get customers to spend all of their time on iOS devices.

I think the power is now shifted to the user and that has been What Apple has always been about - giving the power from the institution to the user. I am hopeful great things are going to happen from this.

Cook reiterated his stance on privacy, and called it a "fundamental human right," as he has done in the past. He said it's "not healthy" to point a finger at companies like Facebook, and instead, we should be focusing on making the web an "unbelievable place."

To me, and we feel this very deeply, we think privacy is a fundamental human right. So that is the angle that we look at it. Privacy from an American point of view is one of these key civil liberties that define what it is to be American.

Cook said customers can trust Apple to be "on their side." "We're the trusted adviser and company here," he said, explaining that people are not fully aware of how their data is being used and who has access to it. "I think this needs to be addressed."

The interviewer asked Cook whether or not he was concerned about machines taking over the world, and he said it's not something that he worries about. Instead, he is concerned about people becoming more machine-like.

Cook said he doesn't consider himself to be political, and suggested that he would not run for political office.

I'm not political. I'm not sure I would really do well in that environment. I think that I can make the greatest contribution doing what I'm doing. [...] I love getting things done and I don't love the political machine in the background. I love Apple, it is the privilege of a lifetime to be leading this company at this time.

He also said that he believes Steve Jobs would support Apple's current trajectory when asked how Jobs would feel "about this moment in time."

In terms of the broader issue of humanity, that was his philosophy. That is the DNA of this company. Apple should always be trying to change the world, and change means make it better. That is the thing that we get up in the morning and focus on doing. And I don't see that changing. That is the north star that keeps us going.

Several snippets of Cook's full interview, which cover topics like DACA, immigration, tariffs, and more, are available over on CNN and are well worth checking out for those who want to see everything Cook had to say this evening.

macduke
I like Tim Cook both as a CEO and person and I don’t care what anyone at MacRumors has to say about it. He’s not perfect but has good principles and is smarter than most anyone here.
Score: 34 Votes (Like | Disagree)

i75.bjc
"I'm not political.", said Tim Cook.
How can this be since this TC is the most political CEO that Apple has ever had. He sticks his nose into all the "important" political issues.
I miss Steve Jobs.
Score: 29 Votes (Like | Disagree)

trifid
Give credit where credit is due, thank you for defending privacy, the new Safari features prove it's not just words. Thank you Tim.
Score: 23 Votes (Like | Disagree)

Perhaps, but getting paid $1B/year+ to do it while preaching about protecting your users' privacy is the height of hypocrisy.

Something tells me you don’t know what hypocrisy means.
Score: 13 Votes (Like | Disagree)

lu0s3r322
I don't see Tim Cook as a political person. Maybe relative to Jobs but I'd rather have Cook's advocacy than Jobs'. Things that he's spoken out about are largely about values important to Apple and things that I think most people agree about. Climate change, DACA, privacy, gay rights, etc. I'd rather have someone of his importance defending these important issues than ignoring them. I agree that he would not do well in the political arena though, I think that's more of what he's saying.
Score: 13 Votes (Like | Disagree)

Says the guy who negotiated a secret deal to have Google pay Apple over $1B per year to make Google the default search engine on Safari on iOS. Apple may not be invading our privacy but they sure don't mind being enriched by letting other companies do it for them.

Let’s be realistic tho. 99% of people probably would make google their default anyway and it’s not like you can’t change it.
Score: 13 Votes (Like | Disagree)
Read All Comments