Apple today released iOS 11.4.1, the fifteenth update to the iOS 11 operating system that was first introduced in September 2017. iOS 11.4.1 comes more than a month after the release of iOS 11.4, a major update that introduced support for Messages in iCloud and AirPlay 2. 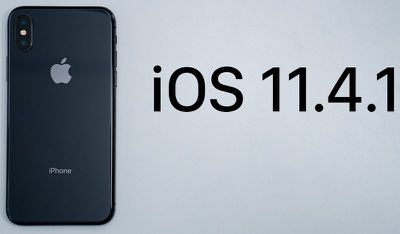 iOS 11.4.1 is a minor update that's been introduced to address bugs that have been discovered since the launch of iOS 11.4, with no new features discovered during the beta testing period. According to Apple's release notes, today's update fixes an issue that prevented some users from viewing the last known location of their AirPods in Find My iPhone and it improves the reliability of syncing mail, contacts, and notes with Exchange accounts.

iOS 11.4.1 also includes USB Restricted Mode, which was first introduced in the iOS 12 beta. USB Restricted Mode is designed to make your iPhone and iPad immune to certain hacking techniques used by law enforcement or other potentially malicious entities to gain access to an iOS device.

There are some iPhone access methods that use a USB connection, downloading data from your iPhone (or iPad) through the Lightning connector to crack the passcode. iOS 12 prevents this by disabling data access to the Lightning port if it's been more than an hour since your iOS device was last unlocked.

USB Restricted Mode is enabled by default when you update to iOS 11.4.1 (or iOS 12), but it can be toggled off if necessary by following the steps in our how to.

Today's iOS 11.4.1 update may be one of the last updates that we see to the iOS 11 operating system.

At its Worldwide Developers Conference in June, Apple introduced iOS 12, the next-generation version of iOS. iOS 12 brings improvements like Group FaceTime, Screen Time for monitoring iPhone and iPad usage, Do Not Disturb improvements, Grouped Notifications, new Memoji and Animoji options, and more, with full details available in our iOS 12 roundup.

macduke
Hopefully this fixes some of the issues that certain users were having with battery life on 11.4.
Score: 19 Votes (Like | Disagree)

Please please I hope this fixes the audio skipping and dropouts.

C DM
Hopefully this helps out with some battery issues that some have been experiencing with iOS 11.4.
Score: 8 Votes (Like | Disagree)

Right on my birthday! :D

markfc
Please please I hope this fixes the audio skipping and dropouts.
Score: 5 Votes (Like | Disagree)

Konigi
Right on my birthday! :D
Score: 5 Votes (Like | Disagree)
Read All Comments

Saturday May 21, 2022 9:00 am PDT by Hartley Charlton
With around four months to go before Apple is expected to unveil the iPhone 14 lineup, the overwhelming majority of rumors related to the new devices so far have focused on the iPhone 14 Pro, rather than the standard iPhone 14 – leading to questions about how different the iPhone 14 will actually be from its predecessor, the iPhone 13. The iPhone 14 Pro and iPhone 14 Pro Max are expected...
Read Full Article • 278 comments