Apple this morning seeded an updated beta of an upcoming watchOS 5 update, one week after releasing the first beta after the 2018 Worldwide Developers Conference Keynote. watchOS 5 is the newest version of the software that runs on the Apple Watch. 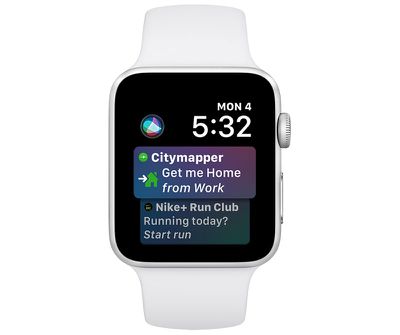 To update, the Apple Watch must have 50 percent battery, it must be placed on the charger, and it must be in range of the iPhone. It would be wise to install the beta on a secondary device instead of a primary device given that this is an early version of the watchOS 5 software that still has bugs to be worked out.

The first version of the initial watchOS 5 beta was pulled by Apple shortly after it was released due to reports that the beta had been bricking some Series 2 Apple Watches, rendering them unusable. This new beta fixes that issue and makes the watchOS 5 update available to developers once again.

watchOS 5 is a significant update to watchOS, introducing Activity Competitions so you can compete on workouts with friends, Walkie-Talkie with push-to-talk functionality for quickly communicating with the people you talk to most, and auto workout detection to make it easier than ever to start and stop workouts.

Leandrogamadf
Why it is named iOS 5?

To remind us of the Scotty days.
Score: 5 Votes (Like | Disagree)

MrGimper
I’m assuming this is the same beta with just an install fix?
Score: 1 Votes (Like | Disagree)

Dustonfoster
Installing now, anything new? Myself and wife were lucky and had no issues the first go around last week.
Score: 1 Votes (Like | Disagree)