Apple appears to be rolling out a series of updates for Apple Music today, including a small but useful new section called "Coming Soon," which allows subscribers to check out new albums about to be released over the next few weeks. On iOS and macOS, the hub is located in the Browse tab > New Music > scroll down to find Coming Soon > tap "See All." Music Videos were previously the last thing to see here, but now Apple has introduced Coming Soon as well. 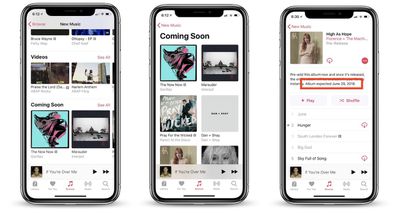 The hub lists artists from a variety of different genres, with impending albums from Panic! At The Disco ("Pray For the Wicked", June 22), Florence + The Machine ("High As Hope", June 29), Interpol ("Marauder", August 24), and more. With only about 10 albums listed, Coming Soon isn't an entirely definitive source of every upcoming album on Apple Music, but albums have been added to the section throughout the morning so it appears Apple will be continuously expanding this area.

Coming Soon on macOS
In another addition, Apple is now making it possible to easily see album launch dates on their respective pages on iOS and macOS. In the Editors' Notes section, following the traditional encouragement to add the pre-release album to your library, there's a new line that begins "Album expected..." followed by the album's specific release date. Some albums not listed in Coming Soon still have a release date specified on their pages, so this update appears to be a bit more wide-ranging.

Lastly, another rollout appears to be happening today in regards to artist profiles, showing up as of now only in iTunes on macOS. These profiles have a slightly tweaked layout with artist portraits in circular bubbles, and a "Featured Release" that includes release dates.

There's also a "Play" button next to the artist's name, which was first noticed by iOS 12 beta testers and appears to be launching now for all Apple Music users, although as of writing MacRumors has only seen profile updates on a computer running macOS 10.13.4 and not on iOS. This button shuffles all of an artist's music at once.

The Coming Soon tab and release dates have appeared for multiple users on iOS 11.4, as well as on macOS 10.13.4. Apple didn't mention Apple Music during its WWDC keynote and at this time doesn't appear to be planning a major update to the app this fall. Besides the updated artist profiles, iOS 12 beta testers have discovered that subscribers will be able to perform searches for music via lyric snippets.

sniffies
The UI is still a huge mess

zulkiflim
Apple Music UI is a mess and confusing.

Spotify is more elegant and the the new music showcased is amazing ...

Apple Music keeps showing me the same songs over and over again.
Spotify changes every day !! i found loads of cool new artists.
Score: 10 Votes (Like | Disagree)

Apple Music UI is a mess and confusing.

Spotify is more elegant and the the new music showcased is amazing ...

Apple Music keeps showing me the same songs over and over again.
Spotify changes every day !! i found loads of cool new artists.

Depending on your musical tastes, Apple Music's suggestion algorithm is an absolute train-wreck.
Score: 6 Votes (Like | Disagree)

Keesmcqueen
That's all nice and stuff, but I'd rather see them focus their attention on cleaning up their messy UI and doing something about double or triple album listings on artist's pages.
Score: 6 Votes (Like | Disagree)

Nice to see album release dates in there, although it would be MUCH more useful if that information actually transferred over into your library when pre-releases are added

At this point I'm just happy pre-releases are starting to successfully appear in my library without having to delete what I had before, search, then add it again. Now if notifications just worked!
Score: 6 Votes (Like | Disagree)

Squirrelxb
Oh my god, is this an actual useful update to Apple Music? Waiting for someone to tell me Spotify or Tidal does this already...
Score: 5 Votes (Like | Disagree)
Read All Comments