Apple is widely rumored to release what will essentially be a lower-priced but lesser-featured iPhone X later this year. Ahead of then, renders have surfaced that may reveal what the device will look like. 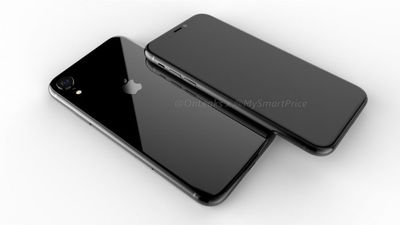 Steve Hemmerstoffer, who runs the OnLeaks account on Twitter, has teamed up with the blog MySmartPrice to share photos and a video of the alleged 6.1-inch iPhone, expected to be announced in September alongside the second-generation iPhone X and a larger 6.5-inch model dubbed the iPhone X Plus.

In addition to the 6.1-inch display, the renders suggest the device will have a notch like the iPhone X, presumably for Face ID given the lack of a home button. The device also has a glass back, making wireless charging a possibility, and an aluminum frame like the iPhone 8 and iPhone 8 Plus.


The renders also suggest the device will sport a single rear camera, whereas the iPhone X has a dual setup with telephoto and wide-angle lenses.

The rest of the device is par for course for an iPhone, with a Lightning connector and speaker grilles along the bottom, volume buttons and a mute switch along the left side, and a power button on the right side.

The renders corroborate information previously shared by former KGI Securities analyst Ming-Chi Kuo, who also said the 6.1-inch iPhone will feature a single-lens rear camera and aluminum frame. He also said it will have an LCD, 3GB of RAM, and perhaps most interesting of all, apparently lack 3D Touch.

Kuo said the 6.1-inch iPhone will be priced from between $700 and $800 in the United States, so tradeoffs were inevitable, including the lack of an OLED, stainless steel frame, 3D Touch, and dual-lens rear camera system. The 6.1-inch iPhone could also be slightly thicker at 8.3mm, versus the iPhone X at 7.7mm.

Earlier today, Korean website The Bell claimed the 6.1-inch iPhone might not launch until November, but the more likely scenario is that Apple unveils and releases all of its new iPhones in September, as the company has reportedly resolved the supply chain issues that led to a staggered rollout last year.

He also said it will have an LCD, 3GB of RAM, and perhaps most interesting of all, apparently lack 3D Touch

mlrproducts
I wish Apple would just make the same exact phone in 2 or 3 physical sizes and be done with it. What a sloppy product line they have now.
Score: 7 Votes (Like | Disagree)

BruiserB
I honestly wouldn’t miss any of the things they might leave out. Feature bloat is causing phones to cost too much.

I don’t expect my phone to be a professional camera. Good photos are fine. I have an iPhone X and like the new form factor, but don’t get what’s so life changing about OLED. I never remember to 3D Touch anything. I just want a decent sized screen, fast performance, and the ability to do ApplePay and whatever new NFC features may be coming. Probably wouldn’t switch to this phone, but would be interested in a future version of it once my X comes to its end.
Score: 5 Votes (Like | Disagree)
Read All Comments

Wednesday November 30, 2022 2:39 am PST by Sami Fathi
Geekbench scores allegedly for the upcoming "M2 Max" chip have surfaced online, offering a closer look at the performance levels and specific details of the forthcoming Apple silicon processor. The Geekbench results, first spotted on Twitter, are for a Mac configuration of with the M2 Max chip, a 12-core CPU, and 96GB of memory. The Mac listed has an identifier "Mac14,6," which could be...
Read Full Article • 275 comments