How to Fix the 'Black Dot' Unicode Bug Crashing iMessage

Yet another Unicode bug has been discovered that is capable of crashing apps and operating systems, ranging from WhatsApp on Android to iMessage on iOS. We won't share the exact string, to prevent it from spreading further, but it includes black dot (⚫️) and pointing left (👈) emojis plus other hidden characters. 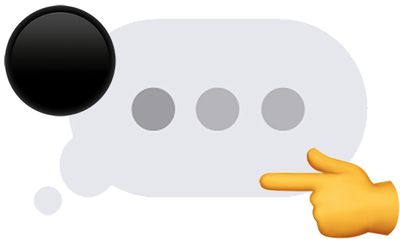 Simply put, this particular Unicode string cannot be rendered properly and leads to system crashing. In general, when the bug affects iMessage, the issue can be resolved by deleting the conversation containing the problematic message. The following steps work on iPhone 6s and newer, excluding the iPhone SE:

If you have an iPhone with Siri but not 3D Touch, ranging from the iPhone 4s to the iPhone 6 Plus, and iPhone SE, the steps are slightly different:

It may also be possible to delete the problematic message on another device running the iOS 11.4 or macOS 10.13.5 betas via Messages on iCloud.

While this latest Unicode bug was discovered last week, it is only now beginning to receive widespread attention in the Apple community, after it was highlighted on a few popular YouTube channels. We've elected not to provide any links, but the specific string is easily Google-able for those interested.

The bug affects both iOS 11.3 and iOS 11.4 beta, and many other software versions, platforms, and devices. Apple has yet to issue a fix, but it will likely release software updates to address the problem soon.

Or just use another messaging app.

At this point, just throw the whole iOS 11 out the window! It was a compete dumpster fire.

Yet another Unicode bug has been discovered that is capable of crashing apps and operating systems, ranging from WhatsApp on Android to iMessage on iOS. We won't share the exact string, to prevent it from spreading further, but it includes "black dot" and "pointing left" emojis and other characters.

Literally the first paragraph in the article people. Take the time to read the article before posting your hate messages.
Score: 20 Votes (Like | Disagree)

At this point, just throw the whole iOS 11 out the window! It was a compete dumpster fire.

The article says that Android is also impacted…
Score: 18 Votes (Like | Disagree)

nfl46
At this point, just throw the whole iOS 11 out the window! It was a compete dumpster fire.
Score: 10 Votes (Like | Disagree)

Or just use another messaging app.

iMessage is the best messaging platform though, especially from a security standpoint. Glitches happen sometimes. The better solution is to wait for the fix (which is usually fast) and not have terrible friends who would send this to you to begin with.
Score: 10 Votes (Like | Disagree)

PBG4 Dude
It's like no one at Apple or Google has ever met Little Bobby Tables.

Monday January 24, 2022 9:20 am PST by Juli Clover
AT&T today announced the launch of upgraded AT&T Fiber plans, which support speeds of up to 5 Gigabits for some customers. There are two separate plans, one "2 GIG" plan and one "5 GIG" plan, available to new and existing AT&T Fiber subscribers. According to AT&T, the new plans are available to nearly 5.2 million customers across 70 metro areas including Los Angeles, Atlanta, Chicago, San...
Read Full Article • 201 comments

Monday January 24, 2022 7:12 am PST by Sami Fathi
Three months after their launch, the 14-inch and 16-inch MacBook Pros continue to experience high demand and seemingly short supply, with shipping dates for both models stretching into multiple weeks in several of Apple's key markets. In the United States, the baseline 14-inch MacBook Pro with the M1 Pro chip is estimated to ship in three to four weeks, promising an arrival by at least...
Read Full Article • 170 comments