Following over a year of shortages, Apple has fully replenished its supply of top case assemblies with glued-in batteries for Mid 2012 and Early 2013 models of the 15-inch MacBook Pro with Retina display. 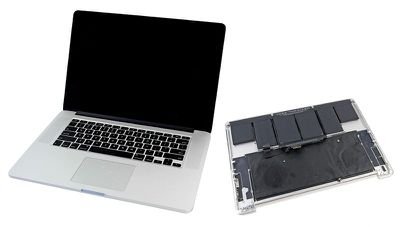 Mid 2012 MacBook Pro and its top case with battery via iFixit
A top case is the aluminum enclosure that houses the keyboard, trackpad, and speaker grilles on a MacBook Pro. For the two aforementioned models, the battery is affixed to the underside of the top case with strong adhesive, meaning the entire assembly needs to be swapped out for a simple battery replacement.

Now that inventory of the top cases is widely available again, Apple is "no longer offering free, delayed repairs" to customers with new service orders, according to its internal memo distributed to Apple Stores and Apple Authorized Service Providers on Tuesday and obtained by MacRumors from a reliable source.

Instead, Apple has resumed charging its standard out-of-warranty fee for all 15-inch MacBook Pro battery replacements, which is $199 in the United States. The fee is waived if the notebook is covered by an AppleCare+ plan.

Apple first notified service technicians about the "severe constraint" of the top cases in March 2017, when it temporarily stopped facilitating battery replacements. Apple expected the shortage to be resolved by September 15, 2017, but it later extended the date to November 15, 2017, and it evidently took longer.

As a temporary solution, Apple permitted customers to delay service until inventory became available, in exchange for Apple covering the full cost of the battery replacement. If a customer was unwilling to wait, however, Apple permitted them to exchange the MacBook Pro for a functionally equivalent model.

This generous policy resulted in many customers being able to exchange a 2012 MacBook Pro for a much newer model, such as a maxed-out refurbished 2016 MacBook Pro with Touch Bar, for just the $199 cost of a battery replacement. The only requirement was that the battery failed Apple's diagnostic test.

All in all, customers with a Mid 2012 or Early 2013 model 15-inch MacBook Pro who are in need of a new battery should be able to pay for the service without significant delays or other issues going forward. The process can be initiated from the Contact Apple Support page by selecting Mac → Mac Notebooks.

Ain't that the truth. I remember when I bought my 12rMBP and I had my initial complaints. "How could they get rid of ethernet and the CD drive!". "I gotta carry this ethernet dongle everywhere now!". "What's the point of making it thinner". Within a couple months I was sold. I found myself on wireless everywhere I went and ditched the dongle, found all my media available electronically, and the size actually improved my day to day function when going from meeting to meeting.

This 2016 MBP I've had since day one is a different story. A year and a half later I don't even look at the touchbar (literally, only touched the ESC, which sucks when it's not physical, and power button). I'm still carrying around an even bigger dongle then what I had originally bought for my 2012 as I need both HDMI and USB-A for meetings, and the size made no difference (especially when I have to have a dongle velcroed to my laptop lid SMH). This laptop is the definition of poor functionality.
Score: 13 Votes (Like | Disagree)

I wonder if all this glued-together waste will find its way to Apple’s quarterly sustainabilty reports.

Amen. Recently people are beginning to study the total impact (e.g. C02 emissions) caused by consumers having to replace phones (and computers) rather than batteries. The environmental impact is substantial. Sadly Apple IS NOT a leader in true environmental stewardship. If they were, they would be the leader is showing how design prowess can be used to reduce and reuse devices. Sadly no economic incentive to do this, Tim gets to travel around and speak as a leader of an environmentally conscious company, and Jony gets lauded for essentially being the King of Thin despite his obvious disregard for the many pernicious affects this has had on durability and lifetime usage.
Score: 10 Votes (Like | Disagree)

RudySnow
I wonder if all this glued-together waste will find its way to Apple’s quarterly sustainabilty reports.
Score: 9 Votes (Like | Disagree)

Baymowe335
Amazing they are even supporting hardware on devices that are 6 years old, EVEN if it's $199 now. Good job Apple.
Score: 4 Votes (Like | Disagree)

needsomecoffee
Apple requires third-party recyclers (who handle the vast amount of product) to shred all Apple devices. The robots you cite are a marketing endeavor (magical). However, that is not the issue. Apple does not build new phones from reclaimed parts. No one does. This issue is to not require the purchase of a new phone when a key component (battery) can be replaced. Had this been a focus in their design, Apple would have had a much greater environmental impact versus the absolutely insignificant affect of their robots. But they would have sold a lot fewer iPhones to date.

Which is precisely what Apple IS doing. Isn’t that the whole point of their disassembly and recycling robots?

Their closed loop supply chain intends to do exactly what you claim they’re not. Reuse and extract raw materials back from dead components.

How might Apple achieve that if they put recycling and repairs in the hands of users? 9/10 users will probably just dump old batteries in the trash. Explain to me how that is a more environmentally conscious approach again?

Thursday December 8, 2022 2:45 am PST by Sami Fathi
Apple yesterday announced that end-to-end encryption is coming to even more sensitive types of iCloud data, including device backups, messages, photos, and more, meeting the longstanding demand of both users and privacy groups who have rallied for the company to take the significant step forward in user privacy. iCloud end-to-end encryption, or what Apple calls "Advanced Data Protection,"...
Read Full Article • 172 comments