In an internal memo obtained by MacRumors, Apple has informed Genius Bar employees and Apple Authorized Service Providers that it is actively working to rebuild worldwide supply of top case assemblies with batteries for Mid 2012 and Early 2013 models of the 15-inch MacBook Pro with Retina display. 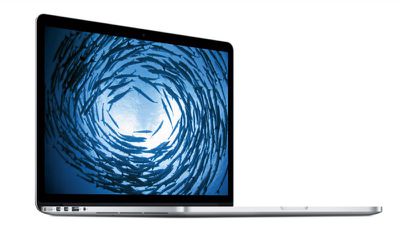 Apple's memo says, effective July 26, service inventory of top case assemblies with batteries is now available for new repairs. The directive adds that MobileGenius, the service and support tool that Genius Bar employees use on the iPads they carry around, has stopped presenting messages about delayed repairs.

For all new repair requests, Apple advises Genius Bar employees and Apple Authorized Service Providers to order the necessary inventory. Apple advises its service providers to inform customers that the inventory should arrive within 15 business days of the part order, corresponding with early August.

Prior to today, a customer with an eligible MacBook Pro that failed Apple's battery diagnostic test was offered the option of exchanging the notebook for a functionally equivalent model. Or, customers could wait until battery inventory became available, in exchange for Apple covering the cost of the repair.

Likely because Apple no longer makes Mid 2012 and Early 2013 models of the 15-inch MacBook Pro, the functionally equivalent model ended up being a refurbished 2015 MacBook Pro, or sometimes even a 2016 or 2017 model, according to many customers who shared their experiences on MacRumors and Reddit.

What made the deal so compelling is that, for the exchange, Apple only charged its out-of-warranty battery fee of $199 in the United States, £199 in the UK, or $259 in Canada, significantly less than a new MacBook Pro costs.

Apple's memo today appears to mark the end of the company offering outright exchanges for newer MacBook Pro models. Many users on MacRumors and Reddit have confirmed Genius Bar employees are now informing customers that battery inventory is available in 15 business days as instructed.

It's unclear if Apple Stores will honor exchanges initiated prior to July 26 that are still being processed.

Apple previously said top case assemblies with batteries for the MacBook Pro models would remain severely constrained until September 15, 2017, according to an older internal memo obtained by MacRumors. The directive did not identify a reason for the shortage, which has been ongoing since at least March.

Thanks MacRumors. You took an internal discussion on your forums where people had genuine battery issues and getting nice goodwill gestures and opened it up and gave it massive attention (with other tech sites copying your articles), attracting the attention of chancers and Apple themselves. Really - what was the need?

I can understand your frustration to some extent, but I won't apologize for sharing information that I believe is valuable to our readers. Apple sending out a new memo a few days later is beyond my control. I think something along the lines of "don't shoot the messenger" applies here.

Affected users will still be able to get their battery serviced in 15 business days now. That's not much longer than it is taking customers to be sent entirely new MacBook Pro models due to the part constraint. It's simply unfortunate that people aren't getting an essentially free MacBook Pro anymore, but that was merely a bonus, and Apple will still be helping customers that truly need their battery replaced for the exact same cost.

In fact, this puts an end to people who are buying eligible models off eBay or Craigslist just to take advantage of the chance to essentially trade up for cheap, and ensures that users who truly need battery service will receive that repair earlier than September 15, 2017, the original date that Apple quoted the part constraint ending on. Nevertheless, if you want to blame me, I understand.

I stand by my commitment to sharing valuable information with Apple readers, as is my job as a MacRumors contributor. I don't control Apple's subsequent actions.

Turns out this likely doesn't have anything to do with MacRumors anyway. Looks like it was a planned move by Apple according to this user-shared screenshot below, revised July 21, prior to my original article. I wasn't aware of this information since I obtain my GSX memos from an Apple Authorized Service Provider and it lacked a few extra details this Apple Retail version has.

theCraigLaw
Thanks MacRumors. You took an internal discussion on your forums where people had genuine battery issues and getting nice goodwill gestures and opened it up and gave it massive attention (with other tech sites copying your articles), attracting the attention of chancers and Apple themselves. Really - what was the need?
Score: 41 Votes (Like | Disagree)

v1597psh
It's happened because of recent MacRumors article on this topic. Everybody with their 2012 MacBook Pros ran out for a cheap laptop replacement
Score: 38 Votes (Like | Disagree)

bkends35
Thanks a lot MacRumors.

I can understand your frustration to some extent, but I can't apologize for sharing information that I believe is valuable to our readers. ...

I think you mean: I won't apologize.

NinjaHERO
The comment anger here seems a little silly. If you didn't even know about the replacement option until the Macrummors article, then how can you be mad at the Macrummors article? If the article alerted Apple and ended the program, you're still better off. If you knew beforehand, you were already taking advantage of this program. If you didn't know until the article was front page news, you had a small window to make it happen. But without the article, you would have just gone on fine never knowing this option existed.

Congrats to everyone who got an updated machine. I think it's awesome this option even existed. Nice move Apple.
Score: 14 Votes (Like | Disagree)
Read All Comments