2018 6.5-Inch iPhone to Be Similar in Size to iPhone 8 Plus, iOS 12 Could Feature Horizontal Face ID Support

Apple's upcoming 6.5-inch OLED iPhone, one of the three smartphones planned for 2018, will be about "the same size" as the iPhone 8 Plus, according to a "reliable supplier source" cited by Japanese blog Mac Otakara. 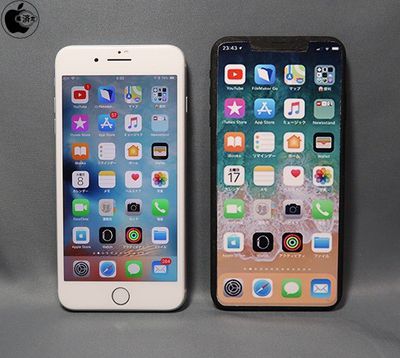 A mockup of the 6.5-inch OLED iPhone, via Mac Otakara
When it comes to dimensions, the 5.5-inch iPhone 8 Plus is 6.24 inches long and 3.07 inches wide, but on that device, there are sizable bezels at the top and bottom. On the 6.5-inch iPhone, which can be thought of as a sort of "iPhone X Plus," there will be slimmer bezels and no Home button, with the display spanning from edge-to-edge.

As for the next-generation 5.8-inch OLED device that will follow the iPhone X, Mac Otakara says it will use the same body as the current iPhone X, but it will feature a larger rear camera lens attributable to a bigger camera sensor.

Rumors have suggested that the third device Apple plans on introducing, a lower-cost iPhone with an LCD display, will measure in at 6.1 inches, but Mac Otakara believes it could instead be a bit smaller at six inches.

It will feature Face ID, but it may only have a single rear camera like the iPhone 8, compared to the dual-lens setup expected for Apple's two more expensive OLED devices. Former KGI Securities analyst Ming-Chi Kuo has also said to expect a single rear camera.

In addition to predicting features for Apple's 2018 iPhones, Mac Otakara's report suggests that iOS 12, the software that will run on both the new devices and existing devices, will feature improvements to Face ID.

Face ID in iOS 12 will reportedly allow users to unlock a device when it is held at a horizontal angle, rather than limiting unlocking via Face ID to the vertical orientation. Bloomberg's Mark Gurman says the horizontal Face ID support is designed for the upcoming iPad Pro models that are expected to incorporate Face ID and the TrueDepth Camera system. It's also likely that the horizontal support being added for the iPads will also work on iPhones.

cmaier
I predict a better camera. And faster processor.
Score: 20 Votes (Like | Disagree)

macduke
Got excited about horizontal unlock until I realized its not talking about your iPhone X being flat on a table. The number of times that I still get frustrated when trying to unlock my iPhone on my desk to check something—even after six months of use—is staggering. I just can’t get over missing that functionality.
Score: 20 Votes (Like | Disagree)

H.E. Pennypacker
I’ve always been a + user but after using the X since launch I’m really enjoying the size a lot more.
Score: 15 Votes (Like | Disagree)

cmaier
None of this seems very unexpected.
Score: 13 Votes (Like | Disagree)

JPack
Enough of these wishy washy rumors. We really need Ming-Chi Kuo back.
Score: 11 Votes (Like | Disagree)
Read All Comments

Monday December 5, 2022 11:44 am PST by Juli Clover
Due to production issues at Apple supplier factories in China, the iPhone 14 Pro and iPhone 14 Pro Max are backordered and basically out of stock at every store. If you were planning to gift or receive an iPhone 14 Pro model for the holidays and didn't already get one, you're basically out of luck because they're gone until late December. Subscribe to the MacRumors YouTube channel for more ...
Read Full Article • 150 comments

Apple Sued by Women After Exes Use AirTags to Stalk Them