Apple CEO Tim Cook is attending the first state dinner of the Trump administration, which is honoring French president Emmanuel Macron, according to CNN. Cook is accompanied by Apple vice president of environment, policy and social initiatives Lisa Jackson.

Guests at the dinner, which is taking place in the White House State Dining Room, will dine on a goat cheese gateau with tomato jam and buttermilk biscuit crumbles, a rack of spring lamb with Carolina Gold rice jambalaya and a burnt cipollini onion soubise, and a nectarine tart with crème fraîche ice cream. 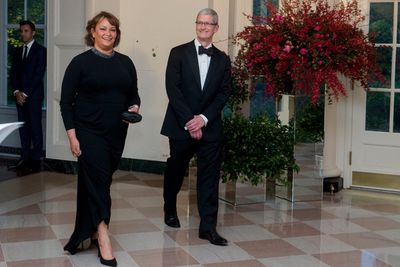 Cook has met with Trump several times in the past, attending a December 2016 tech summit and a meeting of the American Technology Council put together by Trump. Most recently, Cook was in Washington D.C. to meet with Senators Mark Warner (D-Virginia) and Richard Burr (R-North Carolina).

Update: Cook will have a private meeting with Trump in the Oval Office at 1:45 p.m. Eastern Time on Wednesday, according to a copy of his schedule obtained by Bloomberg and other media outlets.

Update 2: Trump has now confirmed the meeting and says the discussion will be focused on trade agreements between the United States and other countries.

Looking forward to my meeting with Tim Cook of Apple. We will be talking about many things, including how the U.S. has been treated unfairly for many years, by many countries, on trade. — Donald J. Trump (@realDonaldTrump) April 25, 2018

Note: Due to the political nature of the discussion regarding this topic, the discussion thread is located in our Politics, Religion, Social Issues forum. All forum members and site visitors are welcome to read and follow the thread, but posting is limited to forum members with at least 100 posts.
Tag: Tim Cook
[ 309 comments ]

As Tim has said many times, you can't exert change from outside.

Speaking as someone who holds Trump in extreme disdain, I applaud Tim for his ability to engage despite obvious and profound disagreements with Trump policy. The sad fact is that Trump was voted as US president by the American people. What do you expect Cook to do? Dissolve Apple in protest?

He’s the duly elected president of these United States. 60 million Americans voted for him. Criticize someone when you feel someone is wrong, but the “all Trump all the time” focus of people on the left is insanity. You people are absolutely deranged. It’s truly mind boggling.

Let the CEO of the worlds biggest company dine at the White House without an analysis of ***** Donald Trump and all the hand wringing. Get a grip, people, please. Most of your lives have not changed one iota since the guy was elected.
Score: 70 Votes (Like | Disagree)

I'm kind of surprised he chose to attend to be honest. But hey a free meals a free meal.

As Tim has said many times, you can't exert change from outside.

Speaking as someone who holds Trump in extreme disdain, I applaud Tim for his ability to engage despite obvious and profound disagreements with Trump policy. The sad fact is that Trump was voted as US president by the American people. What do you expect Cook to do? Dissolve Apple in protest?
Score: 63 Votes (Like | Disagree)

Damn, Mrs Macron is a fine looking lady. France is privileged to have her while we’re stuck with an illegal alien as First Lady.

Tim Cook is sitting next to Mrs Macron.

It never surprises me that the right only cares about their own lives, never anyone or anything else.

The job of the president is to represent and look out for American Citizens. Trump has been doing that since day one. I don't agree with all of his policies but I can admit success when it is present. Say whatver you want about him, he has done what his primary task is pretty damn well. He isnt PC and he isnt giving handouts to non citizens but the average American citizens life has actually improved under his presidency. Unemployment and food stamp usage are at record low numbers nation wide, ISIS are on on the run, North Korea is at a historic moment in willingness to cooperate with the united states, most Americans are paying less in taxes and keeping hundreds if not thousands of dollars a year in their pockets to spend as they see fit. You don't have to like the guy to accept that there have been obvious positives for US Citizens under his tenure. Statements like "the right only care about themselves" are as idiotic as "the left only care about your opinion if it matches their opinion". What have you done that is so helpful to other people? And no, complaining about republicans online doesn't help anyone.
Score: 28 Votes (Like | Disagree)

He’s the duly elected president of these United States. 60 million Americans voted for him. Criticize someone when you feel someone is wrong, but the “all Trump all the time” focus of people on the left is insanity. You people are absolutely deranged. It’s truly mind boggling.

Let the CEO of the worlds biggest company dine at the White House without an analysis of ***** Donald Trump and all the hand wringing. Get a grip, people, please. Most of your lives have not changed one iota since the guy was elected.

by his racist policies.

How are they racist?

And yes I will patiently wait for an answer. We all will.
Score: 27 Votes (Like | Disagree)
Read All Comments

Friday September 30, 2022 12:51 pm PDT by Juli Clover
Apple CEO Tim Cook has been touring Europe this week, sitting down for interviews with various media publications. Augmented reality has been a running theme in Cook's discussions, and it is a topic he brought up again in an interview with Dutch publication Bright, which is part of RTL News. "I think AR is a profound technology that will affect everything," Cook said, echoing comments from...
Read Full Article • 283 comments