Earning a featured spot in the revamped iOS App Store can increase app downloads by up to 800 percent, according to new data sourced from app analytics site Sensor Tower and shared by TechCrunch.

The data, collected from September 2017 to the present, suggests an app that's highlighted using either the "App of the Day" or "Game of the Day" feature in the U.S. sees the greatest increase in downloads. 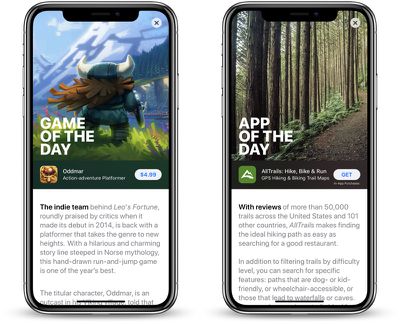 Sensor Tower has also outlined what kind of data Apple has chosen to highlight through the new App Store design. Many of the top publishers that have been featured are larger companies, like Electronic Arts, Warner Bros., Square Enix, Gameloft, Noodlecake Studios, and King, which is unsurprising as these companies have put out some of the most popular apps in the App Store.

13 of the top 15 featured publishers had at least one million U.S. iPhone downloads since the launch of the new App Store.

Apple has, however, also focused on highlighting indie apps. 29 percent of apps featured since the launch of the new App Store have been from publishers who had fewer than 10,000 downloads at the time.

"While it's clearly the case that big publishers are more likely to receive the largest number of features, small publishers still very much have their chance to benefit from a feature on the App Store," said Sensor Tower's Mobile Insights Analyst, Jonathan Briskman.

As noted by TechCrunch, Sensor Tower's data suggests that Apple's goal of increasing developer exposure through the new App Store design has largely been a successful venture.

1.) that Apple continues to have a Complete Stranglehold on App Discovery !, &

2.) that the iOS App Store is still catastrophically broken ... especially their Rankings algorithm !

Users should be able to Discovery apps they are interested in "On Their Own," NOT via Apple's decisions !!!

Users should have control options for filtering apps, based-upon their own criteria ... e.g., Rank apps ONLY via new Ratings within the past 1-2 weeks.

It's NOT Rocket Science, but for whatever Reason, Apple refuses to fix the problems ! ... and they are very easily fixed.
Score: 17 Votes (Like | Disagree)

flyinmac
I don’t pay attention to the featured apps. Or anything that comes up on the opening page.

If I’m in the App Store, it’s because I need something. I don’t just browse to see what’s there. I’m only there if I have a need for something, and then I’m straight into the search tool.

In the early days when I was curious what there was (talking way early days in the first few years of iPhones)... I used to go browse by category and free within categories.

But honestly, these days I find apps to be mostly unnecessary. Of course there are my daily use apps for email, internet, and messages. But beyond that, I find that most apps are recreational. And I don’t use my phone for games. And, I don’t care to spend money on things that I don’t need. So an app has to be absolutely necessary to accomplish a task that I need, before I’ll even start looking for it.
Score: 8 Votes (Like | Disagree)

itsmilo
I am so shallow when it comes to Apps. If the app icon already doesn’t please me I don’t even look any further
Score: 8 Votes (Like | Disagree)

berrymetal
Great so in case one of my apps gets featured, it'll get around 800 downloads based on its current sales
Score: 6 Votes (Like | Disagree)

Genuinely curious -- do most people download new apps these days? I rarely do. And if so, it'll be an app that I search for directly.

I remember seeing a stat about a year ago that showed that most people (it was like 80% or something) use the same ~8 or so apps.
Score: 4 Votes (Like | Disagree)

Great so in case one of my apps gets featured, it'll get around 800 downloads based on its current sales

Put a link to your app in your signature.
Score: 3 Votes (Like | Disagree)
Read All Comments