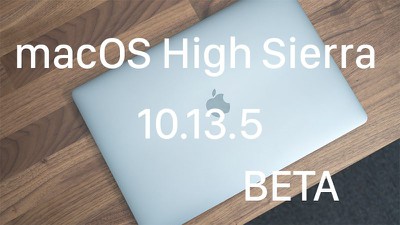 The update also likely includes bug fixes and performance improvements for issues that weren't addressed in macOS High Sierra 10.13.4, but as Apple does not provide detailed release notes for macOS High Sierra updates, we may not know exactly what's included until the new software is provided to the public.

No major outward-facing changes were found in the first beta of macOS High Sierra 10.13.5, but we'll update this post should any new features be found in the second.

You’re implying Apple is focussed on anything...
Score: 5 Votes (Like | Disagree)

Worth the update from Sierra, or still have issues?

My thoughts exactly. Running an old mid-2010 MacPro 12-core, with an SSD plus two HDs for storage and backups. All apps behaving themselves, pretty much, with an Nvidia GTX980Ti GPU. I'm usually all over OS upgrades, but this one seems a bit dodgy for older machines. Do the benefits outweigh the risk?

It's a beta. The second beta. Of course it has issues.
If you realy want to upgrade from Sierra to High Sierra, upgrade to the latest stable version MacOS 10.13.4.
Score: 5 Votes (Like | Disagree)

You’re implying Apple is focussed on anything...

They are.. Yet more iOS stuff with extra Cringemoji.
Score: 3 Votes (Like | Disagree)

otternonsense
10.13.4 had a major issue with multiple display support, and it’s rendered Duet Display for my iPad Pro unusable. The Duet support guy admitted that it broke because Apple hardcoded the resolutions in 13.4, which their team now is (unsuccessfully so far) trying to fix. Apple support of course is mum on this, and Duet cannot give an ETA for a fix.

I haven’t been so frustrated about something so seemingly basic in a long time. iCloud Messages can wait IMHO, as long as Apple does some SERIOUS debugging on their trainwreck OS and stop “fixing” things that aren’t broken.
Score: 3 Votes (Like | Disagree)

pennyzee
I'm not upgrading until they let me use Nvidia cards in my eGPU. This feud of theirs is hurting me as an artist and it makes me real mad.
Score: 3 Votes (Like | Disagree)
Read All Comments

Friday July 30, 2021 9:04 am PDT by Sami Fathi
Tesla CEO Elon Musk reportedly once demanded that he be made Apple CEO in a brief discussion of a potential acquisition with Apple's current CEO, Tim Cook. The claim comes in a new book titled "Power Play: Tesla, Elon Musk and the Bet of the Century," as reviewed by The Los Angeles Times. According to the book, during a 2016 phone call between Musk and Cook that touched on the possibility of ...
Read Full Article • 186 comments