Nearly two weeks after Fitbit first announced the Fitbit Versa, reviews for the new smartwatch have now emerged online today. Many of the reviewers agreed on the following points: the Versa is a step above last year's Fitbit Ionic, trading off GPS and NFC is worth it for the $200 price tag, and Fitbit still hasn't launched a device that could properly challenge the Apple Watch's dominance.

The Verge started off by pointing out that text message notifications on the Versa are clunky for iOS users, especially because "there's no way to respond to them" from the watch. Android users will have a "quick replies" feature updated in May, and because of this and other factors The Verge ultimately explained that the Fitbit Versa could appeal to "everyone other than those hardcore Apple users." 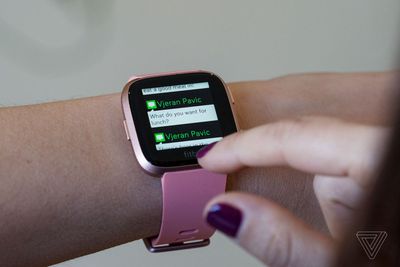 Image by Vjeran Pavic via The Verge

So it all comes down to how much you want to pay, how tied into the Apple ecosystem you are, and how much you care about battery life. Fitbit may have a hard time luring away hardcore Apple fans, especially since the Versa is coming to market years after the original Apple Watch. On the flip side, it may be appealing to Android users, as Google’s Wear OS smartwatch platform has stagnated at this point.

Engadget said that while the Versa looks like a "slightly wider Apple Watch," it's also the "best-looking Fitbit yet." To get the Versa to its $200 price point, Fitbit removed some features from the standard version of the smartwatch, like GPS and NFC, but Engadget said that this price drop is what could help the company "reach a bigger audience" in the future.

Ultimately, the things that stand out about the Fitbit Versa are its sub-$200 price and attractive design -- this is a Fitbit that finally looks more like a smartwatch than a fitness tracker. With the addition of female health tracking in May, the Versa could be even more helpful to women. It's disappointing that GPS isn't built in and NFC is missing, but those tradeoffs may help Fitbit reach a bigger audience.

In its review, Ars Technica called Fitbit's fitness app the "best health and fitness program for any wearable," thanks to its flexibility to adapt to both workout novices and experts. The site liked how the $39.99/year Fitbit Coach service integrated with Versa, although the wearable experience is still lacking in comparison to the mobile app.

However, Fitbit has the opportunity to make its wearable operating system just as killer as its mobile application and overall ecosystem—if it can do that, its devices will be strong contenders in the smartwatch world. It may not have made a splash as Fitbit's first smartwatch, but if any device can entice users to take a chance on Fitbit as their smartwatch provider, it's the $200 Versa.

As a quick tidbit, most of today's reviews mentioned that the process of swapping out bands on the Fitbit Versa is far more difficult when compared to Apple Watch. A few also commented that the Versa's bezels are sometimes noticeable in certain lighting situations, with The Verge further pointing out that Fitbit "had enough space to cram the word "fitbit" onto the watchface, a questionable design choice."

More opinions on the Fitbit Versa can be found online at the following websites: Wareable, TechCrunch, CNET, Tom's Guide, Gizmodo, and PCMag.

mtneer
FitBit needs to work on their product quality and customer support. I had a ChargeHR that fell apart at the band after 6 months. When I called in to request a warranty replacement, they accused me of buying from a "non-authorized" store and refused to entertain warranty. Now, how the hell is the customer supposed to keep track of what is an authorized store and what is not? I bought an Apple Watch 2 & have no intention of looking back at FitBit everafter.
Score: 9 Votes (Like | Disagree)

Ds6778
Purely anecdotal, but most of the people I see with fitbits are people who are semi-interested in fitness tracking, and dont want to spend more then $100-150 on it.
Score: 9 Votes (Like | Disagree)

GrumpyMom
Goodness that thing is hideous. It’s like someone stomped on an Apple Watch. As an Android phone user (and an iPhone user on my main phone line) I can’t say that would lure me away even from my two year old Samsung watches.

I take back every negative thought or word I have had about Jony Ive. The man and his team at Apple are geniuses compared to whoever it is at these companies who design these atrocities that they intend for us to wear almost 24x7.

Is it that hard to design a fitness SmartWatch that is shaped nicely, sized to fit a range of adult wrists, made of attractive and relatively non-irritating materials, with bands that are easy to swap in and out yet stay put when they are supposed to? Oh and don’t stop working or fall apart in under a year.

Looking at what’s been released for these past several years, apparently it’s almost impossible. Samsung and other manufacturers for the Android market manage to check some of these requirements but only Apple manages to get all of them. I have had an Apple Watch fail on me in under a year but that’s not the norm and at least I could have easily gotten it fixed if I wanted to.

Since I do own and love two Android phones and have contemplated a complete move to Android when my iPhone 8 Plus is no longer viable, I have been researching my option for smart watches. The reviews and comments have not been very encouraging. And the design and sizes of what would be available to me as a woman with slender wrists is very frustrating and off-putting.
Score: 9 Votes (Like | Disagree)

Abazigal
Why would I pick this over a series 1 again?
Score: 8 Votes (Like | Disagree)

scrapesleon
Doesn’t seem like much to lure anyone away other than the price
Score: 7 Votes (Like | Disagree)

I laugh cause these people are clueless

It presents the information in easy to read accessible format, you don’t have to go through several annoying steps to get to it like on Apple Watch

Plus the Fitbit app is miles better then health kit presenting health and fitness tracking data
Score: 4 Votes (Like | Disagree)
Read All Comments

Friday November 25, 2022 2:58 am PST by Sami Fathi
An Apple engineer has addressed the lack of lossless audio support in the second-generation AirPods Pro in a new interview. Current Bluetooth technology in the AirPods lineup means that Apple's audio products do not support Apple Music Lossless audio. Apple has previously hinted that it may develop its own codec and connectivity standard that builds on AirPlay and supports higher quality...
Read Full Article • 158 comments