Apple today seeded the seventh beta of an upcoming macOS High Sierra 10.13.4 update to developers and public beta testers, one week after seeding the sixth beta and over a month month after the release of a macOS High Sierra 10.13.3 Supplemental Update to address a bug that could cause apps to crash when receiving a character from the Indian language Telugu. 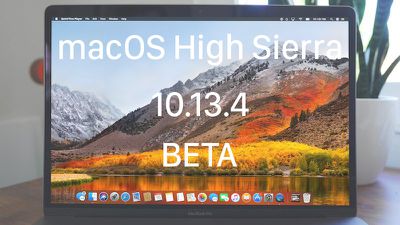 The update offers support for some features that are available in iOS 11.3, like Messages on iCloud, which uploads all of your iMessages to the cloud. It will also support Business Chat, a feature coming when iOS 11.3 and macOS 10.13.4 are released to the public, and it includes support for eGPUs. Apple released release notes for macOS High Sierra beta 6 in certain countries, providing details on what's included in the update. The notes are below:

- Adds support for Business Chat in Messages in the U.S. and Canada
- Adds support for external graphics processors (eGPU)
- Fixes a graphical corruption issue affecting some iMac Pro apps
- Adds a keyboard shortcut for moving to the rightmost open tab in Safari by pressing Command +9
- Adds a feature for sorting Safari bookmarks by name or URL
- Fixes a bug that could prevent links from appearing in Messages
- Improves protection o confidential data by filling usernames and password fields in Safari only when selected
- Displays new warnings in the Safari Smart Search Field when interacting with forms that require credit card data or passwords on unencrypted web pages
- Displays more information on how personal data is used by certain features

The macOS 10.13.4 update also brings the smoke cloud wallpaper that was previously only available on the iMac Pro and it introduces a warning when opening up a 32-bit app as part of an effort to phase them out.

In the future, Apple plans to phase out 32-bit Mac apps, just like it did with 32-bit iOS apps. Apple says macOS High Sierra is the last version of macOS that will support 32-bit apps without compromises.

We're nearing the end of the macOS High Sierra beta testing period and a release could come any day now.

If you think they’ll talk about eGPUs at an educational event I have a platter of disappointment to serve you.
Score: 8 Votes (Like | Disagree)

I unfortunately made the mistake of upgrading and am highly regretting it.

I am with you. Apple's software quality control went from being one of the best, to where we are now, whcih is absolutely terrible.

I am absolutely dead set on not upgrading to 10.14 next year until it reaches 10.14.4 or even 10.14.5. The numerous problems with High Sierra have caused (and still cause) me a tremendous amount of pain. I cannot afford to trust Apple anymore and for the foreseeable future, I will remain one operating system behind the current times.
Score: 6 Votes (Like | Disagree)

I am with you. Apple's software quality control went from being one of the best, to where we are now, whcih is absolutely terrible.

I think they have hired a new guy and he is going to change the direction of software development to address these exact problems. They knew it and hopefully this new guy can get it back to number one again. There was an announcement somewhere I will try to get a link.
Score: 4 Votes (Like | Disagree)

How do you know it’s buggy for you if you skipped it?
Score: 4 Votes (Like | Disagree)

Does this mean ios 11.3 wont be ready for GM soon and have another beta?

It means that iOS will probably get one final beta build/GM before public. So next week most likely for public.
Score: 3 Votes (Like | Disagree)

I really wish I could run Snow Leopard

So it can erase your entire Home folder? ;)
Score: 3 Votes (Like | Disagree)
Read All Comments