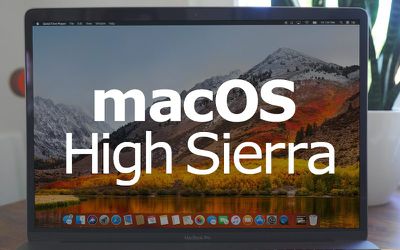 Today's update addresses a bug that causes apps like Messages to crash due to an inability to render a character in the Indian language Telugu. When sent or received, the character in question can cause an app like Messages or Safari to freeze up and become unresponsive.

There's also a separate macOS High Sierra 10.13.13 Supplemental Update for iMac Pros, which is designed to fix the Telugu bug on those machines.

Prior to today's update, the only fix in an app like Messages was to delete the entire conversation containing the buggy character. The update also impacted iOS 11.2.5, and Apple also released a new iOS 11.2.6 update to fix it.

Apple previously addressed the Telugu character bug in iOS 11.3 and macOS 10.13.4, but those updates are still in beta testing and won't be released until the spring. Apple last week promised a minor update to fix the bugs in the meantime.

Update: Apple released a second supplementary update for the iMac Pro in late February as iMac Pro users were not able to install the update.

Yep, Apple already had everyone switched back over to work on animoji AR for the next iOS release.
Score: 9 Votes (Like | Disagree)

i just hope APFS will be polished enough with the launch of 10.14, because as you said, the file system is a high priority part of the operating system.

It would be nice to have it well optimized for mechanical hard drives and fusion drives as well.
Score: 5 Votes (Like | Disagree)

LincolnsiPod
High Sierra has been the literal worst software experience I've had with Apple by far.

Messages ARE still out of order and has persisted for months! WTF
Score: 4 Votes (Like | Disagree)

Probably not; as I mentioned in the dedicated thread on that topic, it's a silent error which should be a loud error. Not to trivialise the issue, but as potential filesystem bugs go, that's a breeze.

i just hope APFS will be polished enough with the launch of 10.14, because as you said, the file system is a high priority part of the operating system.

It would be nice to have it well optimized for mechanical hard drives and fusion drives as well.

I think you are overplaying a single, minor bug. APFS is fine - there are hundreds of millions of people who have been using APFS for their critical data-storage needs for about a year, and we're not hearing about widespread data-corruption or anything.

The one thing I have noticed, is that these minor bugs are getting much more publicity than they used to. I don't think Apple's software has gotten worse overall; there are always better and less-excellent releases of any software. It's just that every minor bug appears to be an urgent catastrophe for some people. You have never used a piece of software with no bugs, I promise.
Score: 4 Votes (Like | Disagree)

This was pretty much my experieince
I did a forced restart
Restored machine from weekly clone and automatic hourly Time Machine backups
I won't go near this supplemental update till I see some remedy
I've used Macs since 1983
Do regular "maintenance"
First "update" that I had any issue with
Does this say something?
Score: 2 Votes (Like | Disagree)

MDA84
Last time my bran new MacBook 15 2017 updates itself last month it couldn’t restart!!! Saying the update is corrupted or something, spent hours to factory reset my Mac OS system. So scary it was never happening with windows 10 or 8... Apple seems to have been busy with maximizing the profit and build the ring and left their promises aside. See the homepod
[doublepost=1519098457][/doublepost]

I think I will let some other people install this and see how it turns out for them before installing it on my machines. I know it is a very minor update, however, with the way Apple QC has been...well, that speaks for itself.

Perfectly right... Apple QC these days is
Frightening really. My brand new MacBook 2015 crashed last month on automatic update. I restarted the laptop few days after without knowing the system updated and the system was lost!! Had to factory reset MacOS!!
For me they really left over the Mac for
Their Animoji AR and other. Really sad
Score: 2 Votes (Like | Disagree)
Read All Comments