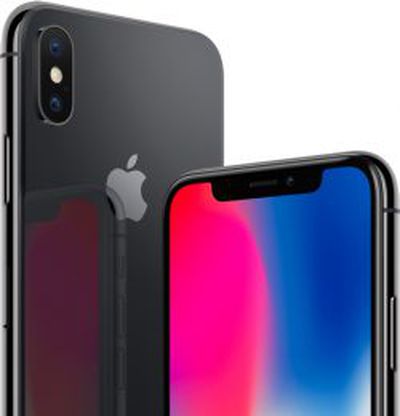 Apple has managed to reduce the manufacturing cost of its iPhone X successor to a level much lower than the current flagship model, according to DigiTimes' research analyst Luke Lin.

Lin cited information from Apple's upstream supply chain as indicating that the new device's MBOM [manufacturing bill of materials] will be more than 10% lower than that for iPhone X. He added that the MBOM of the iPhone X was more than US$400 in 2017.

Apple is rumored to be introducing three iPhones in 2018: The first is said to be a second-generation version of the iPhone X, with the same 5.8-inch OLED display, while the second can be thought of as an "iPhone X Plus" with a larger 6.5-inch OLED display.

Apple is also reportedly planning to introduce a new, more affordable 6.1-inch iPhone with an LCD display. However, recent engineering samples from the 5.8-inch device are said to show components with lower-level specifications or lower capacities than those of the 6.1-inch LCD iPhone, with LPDDR memory being one of the major differences.

According to Lin, the cost reduction could see Apple position the new 5.8-inch device as the cheapest model of all three next-generation iPhone models. The analyst also believes a project to develop a 5.8-inch LCD iPhone has been suspended since the end of the Lunar New Year holidays in mid-February and may be eventually terminated.

Lin reckons weak demand for iPhone X meant Apple needed a lot less OLED panels from Samsung than it said it would, which gave the Korean firm more bargaining power with regards to panel quotes for the next generation of iPhones. However, Apple has supposedly reached an agreement with Samsung and secured "satisfactory terms" that will prevent display panel cost increases.

DigiTimes' sources often provide reliable information, but the site has a mixed track record when it comes to interpreting that information and accurately deciphering Apple's plans, so it would be wise not to base any future purchasing decisions on today's report.

Thank you for beta-testing.

Now give me back my LCD.

I don't care if you care or not, silly. I've been using Apple stuff for 20 years, and up until recently I have existed in that eco system pretty much exclusively. I'm a pro user, and it turns out that costs matter in business.

At the beginning of the 2000s Apple was really the only game in town for digital creatives, so we stuck with Apple stuff. That's all very well, but slowly Apple have 'ditched' as you put it, various Pro centric software and hardware in favour of consumer devices. An iPad Pro is a fantastic computer, but it's still not going to cut it as a workstation. Cutting off all of the connections on a MacBook pro in favour of a fairly useless Touch Bar and neutering the RAM is kicking pros in the guts. But there never used to be an alternative.

The point is that the alternatives have caught up, and in some cases overtaken Apple. And for less money.
I used to think that iOS was the only OS. It works out that android does a lot of things better, and it turns out that it doesn't matter anyway. Microsoft have a superior cloud platform (over iCloud)and Google are open house when it comes to software and digital assistants have left Siri way behind.

Apple Music is great, but then so is Amazon Music, or Spotify.

So let me help you out. You say you don't know why people ditching iOS have to justify it - well I don't. But the glory of the internetz means I can. I use iOs on my iPad. I use android on my Google Phone. I Use One Drive for my cloud services. I use Amazon for my Music. I use an iMac for my business, and my wife uses a PC for hers.

That wasn't possible 5 years ago, maybe even less.

I thought I'd never be able to not have to only use Apple for services and would have to pay the premium, but now I don't.

You don't have to care about that, but on a forum that's discussing the merits of a phone that is over $1K that even die hard iOS fans don't have to own when the competition is better (for some things), cheaper (in every case), and less restricting, less of a walled garden, then some people might actually find that it's of use to actually (ironically?) "Think Different" for a change.

We need an iPhone X-style "all screen" iPhone with reduced size and weight. Bring it back to around the iPhone 6/7/8 dimensions, or even slightly smaller. But with the larger all-screen display.

This is basically what the X is.
Score: 12 Votes (Like | Disagree)

I guess. Whatever works for you. $200 is nothing though.

Also, to those that say this is not a phone and they don't need to buy gps, camera etc.? Please wake up! That time has passed for this justification. EVERY phone now has these features so that lame excuse no longer works.

iPhone X might be technically powerful but design and price is awful and Apple did cross the line here for many customers.

Overall, I really hope that people will vote with the wallet this time as otherwise we will have Apple PHONES costing $2000 soon or more!

and btw. all these technological marvels usually come in 2-3 years to all mid range phones so people really need to ask if having the latest and greatest at the time is really crucial to them or if they are just spoilt brats.
Score: 8 Votes (Like | Disagree)

Please stop with the Android compare. Compare that with the $950 Note. Why should ANDROID owners pay a premium for a phone that runs Android and costs 3X as much?

Please stop comparing iOS to Android like they are the same. No one wants Android when they use iOS. It's better to ask Android users why they buy flagship Android phones.

I use iOS and MacOS too, and I also use Android devices. I want and prefer Android because I think it's better, more open, more versatile, and less closed off. I know that doesn't mean anything to you, but there you go.

The idea that paying more for iOS makes it better is out of date. It's not 2008 any more.
Score: 8 Votes (Like | Disagree)

Fanboi4life
They should have never priced the X at over 1k. Apple makes enough money from their die-hards and small initial profit margin wouldn't have killed them if they knew overtime they could reduce costs.
Score: 8 Votes (Like | Disagree)
Read All Comments

Thursday January 26, 2023 6:30 am PST by Tim Hardwick
The new Mac Pro coming later this year is expected to feature the same spacious modular design as the 2019 model, but with fresh concerns over its lack of upgradeability surfacing, some users are beginning to wonder what the transition away from Intel architecture actually means for Apple's most powerful Mac. The current Intel Mac Pro that Apple sells is popular with creative professionals...
Read Full Article • 494 comments