In his tweet, Mnuchin thanked Tim Cook for Apple's commitment to invest $350 billion in the United States, which refers to a January announcement from Apple where the company said it planned to bolster the U.S. economy through job creation, existing investments, and new investments. 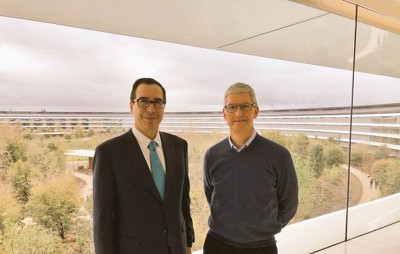 Glad to visit @Apple HQ with @tim_cook. Thank you for your commitment to invest 350B in USA! #TaxCutsJobsAct pic.twitter.com/TasRA55smG — Steven Mnuchin (@stevenmnuchin1) March 16, 2018

Apple said it will contribute $55 billion to the economy in 2018 and $350 billion over the course of five years. At the same time, Apple also pledged to increase its Advanced Manufacturing Fund, designed to create jobs in the U.S. through investments in suppliers, to $5 billion, up from $1 billion.

brian3uk
I sure hope he didn’t walk into one of those glass walls and lacerate his smug face. That sure would be a shame.
Score: 39 Votes (Like | Disagree)

DanGoh
This dude Mnuchin is so corrupt, and I can't believe people let him use our tax dollars the way he's been using them.
Score: 15 Votes (Like | Disagree)

WarHeadz
My god he’s so disgusting. Never has this country had to endure such an embarrassment of an administration.
Score: 15 Votes (Like | Disagree)

I sure hope he didn’t walk into one of those glass walls and lacerate his smug face. That sure would be a shame.

Tim should be used to the layout by now.
Score: 13 Votes (Like | Disagree)

jdillings
I hoped Mnuchin talked to Timmy about important stuff like updating the Mac Mini line.
Score: 11 Votes (Like | Disagree)
Read All Comments

Thursday April 8, 2021 12:42 pm PDT by Juli Clover
Samsung has launched "iTest," an interactive website experience that's designed to allow iPhone users to test out Android on a Galaxy device, or "sample the other side," as Samsung puts it. Subscribe to the MacRumors YouTube channel for more videos. The iTest website is being advertised in New Zealand, according to a MacRumors reader who came across the feature. Visiting the iTest website on...
Read Full Article • 206 comments

Friday April 9, 2021 2:22 am PDT by Tim Hardwick
It's no secret that Apple sees iMessage as a big enough selling point to keep the service exclusive to Apple devices, however new court filings submitted by Epic Games in its ongoing lawsuit with the company reveal just how Apple executives have rationalized their decision not to develop a version of iMessage for Android. Apple clearly recognizes the power that iMessage has to keep users...
Read Full Article • 344 comments

Friday April 9, 2021 4:58 am PDT by Sami Fathi
According to market data compiled by Counterpoint Research, Apple's smallest iPhone since the 2016 iPhone SE, the iPhone 12 mini, struggled to obtain a spot in the top five list of best-selling smartphones in January of this year. According to the market data, the iPhone 12 mini came in eighth place for the best-selling smartphone worldwide in the first month of the year. However, the iPhone ...
Read Full Article • 262 comments

Friday April 9, 2021 12:21 pm PDT by Juli Clover
Epic Games and Apple are involved in a highly public lawsuit in the United States, but Epic has also sued Apple in other countries, including Australia, in an attempt to boost its chances of getting a favorable ruling. Things aren't quite going Epic's way, however, as the justice overseeing the case today decided that he's going to let the two companies battle it out in the United States. ...
Read Full Article • 128 comments