Nest has begun shipping the Hello, a smart doorbell that's capable of streaming 160 degree HD live video from your door directly to your phone.

First announced back in September, the $229 doorbell device can take a photo of a person standing on your doorstep before the bell is even rung, and also supports two-way audio so you can speak with them. 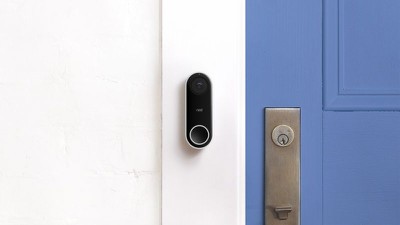 The doorbell features a 3-megapixel camera with infrared night vision and records 1,600 × 1,200 video at 30 frames per second. The Hello also has a 160-degree field of view, and is 802.11 a/b/g/n Wi-Fi compatible. It stores up to three hours of video out of the box, with additional storage available by taking up a Nest Aware subscription.

In addition to shipping Hello orders via its online store, Nest also announced it is now shipping the $249 Nest x Yale Lock, a tamper-proof deadbolt front door lock with touchpad that connects to the Nest app. The touchpad means owners can give people they trust a passcode instead of a key for entry, and the door it's attached to can be locked and unlocked wirelessly.

Lastly, Nest also revealed that it is now taking pre-orders for its new wireless external temperature sensors for the Nest Learning Thermostat and Thermostat E. Owners can add up to six of the battery-powered, inch-wide sensors, each of which cost $39, or $99 for a three-pack. Nest also says it plans to bundle its thermostats with the temperature sensors after they officially hit stores in April.

jm001
So wouldn't someone steal that doorbell instead? OR damage it? As for the lock, I never trust these automated/wireless locks. I mean how many things do we want on wifi? We are heading towards a future of everything being hackable from a distance.
Score: 6 Votes (Like | Disagree)

So wouldn't someone steal that doorbell instead? OR damage it? As for the lock, I never trust these automated/wireless locks. I mean how many things do we want on wifi? We are heading towards a future of everything being hackable from a distance.

Most smart doorbells have a screw that is hard to remove and very very small, this keeps people from steeling your doorbell and if they do, you have photo of them doing it. Why would someone hack your door from far away, there I no point. Also, they are much harder to pick, and locks (dumb/smart) are only to keep honest people out. If someone wants in your house, they are getting in your house.
[doublepost=1521115613][/doublepost]

Sure - but one of the new product in the story are secondary thermostats to control the temp in individual rooms. I'm juts wondering how they work without the ability to automatically control the TRVs.

"you can let your Nest thermostat know which room should be a certain temperature at a certain time of day. And that room will be always be the most comfortable."

If it works like the Ecobee, it just uses the remote sensor and not the sensor built into the thermostat to control temp.
Score: 6 Votes (Like | Disagree)

meady100
Call me a luddite, but surely the time and money spent researching, buying, fitting and setting up a smart lock will never be recovered by the 'convenience' of what it does!? The old one was never broke!
Score: 5 Votes (Like | Disagree)
Read All Comments