Quick Takes: 'Why Hasn't Samsung Ditched the Headphone Jack Yet?' 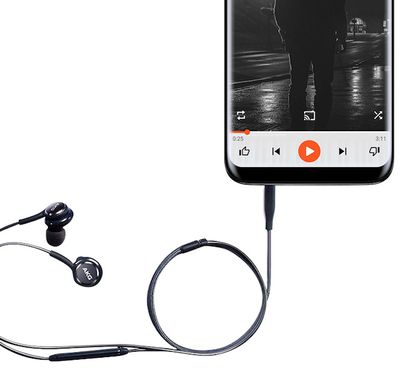 - Why hasn't Samsung ditched the headphone jack yet? Daring Fireball's John Gruber remains convinced that headphone jacks are going the way of the floppy drive, but he explains why Samsung might not be ready to ditch the 3.5mm port yet, as Apple did with the iPhone 7 a few years ago.

Samsung is more of a "do what the customer is asking for" company; Apple is a "figure out what they’re going to want" company. Samsung’s customers aren't asking for the headphone jack to be dropped, so the path of least resistance is to just keep the jack. But looking at what's available on the market, a big problem facing Samsung (and the rest of the Android world) is that the USB-C headphone market is a mess — and expensive to boot. "No-name brand headphones at high prices" is a hard sell.

Commentary: Apple arguably has an advantage in this space thanks to its custom W1 chip, which provides a quick and seamless connection between Apple devices and its wireless headphones like AirPods and BeatsX.

- Dutch bank hints that Apple Pay could launch in the Netherlands next week: Dutch mobile bank bunq was recently added to the list of Apple Pay participating banks in Italy. When contacted by the Dutch blog iCulture.nl about the possibility of Apple Pay launching in the Netherlands, the bank said it could not share any details before a press conference it is holding March 20.

Commentary: During its earnings calls, Apple usually mentions a list of countries where Apple Pay is coming soon, and the Netherlands hasn't been one of them. If this rumor proves true, however, hopefully it signals a wider expansion of Apple Pay to other European countries like Germany and Poland.

- Amazon considered buying Texture before Apple deal: "Next Issue Media LLC, owner of Texture, hired investment bank Moelis & Co. in the past year to advise on a sale process, said the person."

Commentary: Amazon already operates a Texture-like service called Kindle Unlimited, which provides subscribers with access to over one million e-book titles, thousands of audiobooks, and select magazines on Kindle Fire, iOS, or Android smartphones and tablets for $9.99 per month.

- Apple details Intelligent Tracking Prevention 1.1: All partitioned cookies are treated as session cookies and are not persisted to disk. Domains with a pending purge will not be able to set new cookies and their existing cookies are not sent in requests. These updates are available in Safari 11.1 on iOS 11.3 beta and macOS High Sierra 10.13.4 beta, as well as in Safari Technology Preview.

Commentary: Intelligent Tracking Prevention is a Safari privacy feature which detects domains that have the ability to track the user cross-site and either partitions or purges the associated website data. The feature is designed to stop companies from invasively tracking customer web browsing habits across websites.

ericgtr12
They haven't abandoned the headphone jack because it's still useful to most people who don't want to go all in on Apple's proprietary jacks or use an adapter.
Score: 95 Votes (Like | Disagree)

oneMadRssn
Asking a negative is always silly. "Why hasn't Samsung stopped selling TV's yet?" Who knows? Why should it?

Instead, ask the affirmative: "Why should Samsung ditch the headphone jack?" If the best anyone can reasonably come up with is because Apple did it, then there is your answer to the first question.
Score: 77 Votes (Like | Disagree)

mistasopz
Samsung was able to keep the headphone jack still provide water resistance. Allowing the customer to use both wired and non-wired solutions is a big plus for me. If you could get a new iPhone with the headphone jack I think it would be better, even if it was a fraction of a millimeter thicker.
Score: 53 Votes (Like | Disagree)

busyscott
Ugh, Apple is infuriatingly arrogant in this area. Them ditching the headphone jack and every connector on the MacBook Pro and replacing it with a still rarely used USB-C isn’t like their moves in the past.

When they ditched the optical drive I thought, “I haven’t used a disc in 3 months, this makes sense.”

Still to this day I find myself wishing for a headphone jack 3-5 times a week. I also have a MacBook Pro with usb c and have to use an adapter 2-4 times a DAY.

They don’t even ship usb C with iPhones for goodness sakes.
Score: 46 Votes (Like | Disagree)

Soccertess
Not sure Apple is "figuring out" what customers want.

Who in the world wants one type of port on laptops, who wants to carry around dongles (and be pissed off when you don't have one with you), who wants only one port on a laptop, who wants siri to be SO crappy, who wants homepod to be limited to one ecosystem, who wants a mac pro that isn't updated in three years, and who wants a golden watch that is useless in 8 months (maybe all of us if we have 10k to burn a year!

There is a pattern, and it's all product updates under Tim Cook. Personally, I would like a 3.5MM. Apple's dongles are flimsy and super week, and they made the transition for customers extra hard.

So I would love a 3.5mm back but I'm not too stuck on it. The true problem is cook, that guy needs to go!
Score: 28 Votes (Like | Disagree)
Read All Comments