This Saturday, March 10 is "Mario Day," a day when Nintendo celebrates its mascot Mario "and his many awesome fans" around the world. Although the full plan for the company's celebrations on Saturday have not yet been revealed, one part has and it focuses on the iPhone and Android game Super Mario Run (via TouchArcade).

On March 10, Nintendo will discount Super Mario Run's $9.99 in-app purchase that unlocks the full game down to $4.99, and that 50 percent discount will run for two weeks, through March 25. Nintendo has created a detailed table that shows the special discount price of Super Mario Run on the App Store and Google Play Store in every country of availability, which you can see on its website. 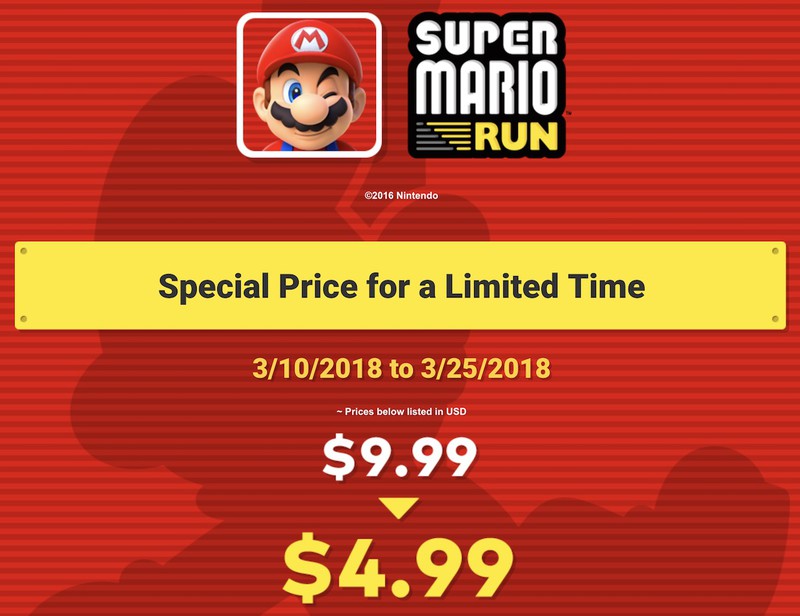 The last IAP discount for Super Mario Run came in September 2017, alongside what Nintendo called the "biggest update ever," introducing a new gameplay mode called Remix 10, new character Princess Daisy, new world, and more. It's unclear if the game will be getting more content this weekend, like it did last September, alongside the price drop.

For Mario Day last year, Nintendo celebrated in a variety of ways, including working with nonprofit Starlight Children's Foundation to provide hospitalized children with brightly colored hospital gowns featuring the company's well-known characters. There were also Mario-themed frames on Facebook, games on sale across Nintendo console platforms, and major events at PAX East in Boston and the Kids' Choice Awards on Nickelodeon.

You can download and play the first few levels of Super Mario Run for free on the iOS App Store [Direct Link], and the discounted $4.99 in-app purchase should begin appearing on Saturday.

TrueBlou
I’m sure this thread will fill up with complaining about it’s normal price and maybe even this sale price.
And how it’s a watered down Mario game, or just another endless runner.

But you know what, I like it and I’ve been a Mario fan since before he had a name.
I paid full price for it on release day and almost a year and a half later, I still play it. I’d call that value for money.

I’m also glad they went with the gameplay style they did. I’d hate the precision platforming of a traditional Mario game with bloody imprecise, non-tactile touchscreen controls (I don’t always carry a controller with me).

It’s the perfect style of game for filling 5 minutes here and there when you’re waiting about. If I want a traditional game, that’s what I have traditional consoles and handhelds for. On a touchscreen phone, I like simplicity.

Don’t get me wrong, I’ve tried lots of traditional platformers on iPhone and iPad. As far as I’m concerned though they all (yes even the one I made, though I, and the many people who tested it, consider its multitude of control options and more than six months spent just refining touchscreen controls among the slightly better ones) suffer from a lack of a tactile controller. It’s fine when you’re using one but when it’s just you, your iPhone and it’s touchscreen... Ewwwww.

Just thought I’d have a rant, I’ve not had one for a while :p
Score: 5 Votes (Like | Disagree)

Yep. I’ve still never played this game, which I was very initially excited about, because apparently when I play on one of my Nintendo consoles I’m not in danger of being an imminent pirate, but if I’m using iOS I am already donning an eye-patch and setting squaky the parrot on my shoulder according to their paranoid fantasies. So that’s a shame, I guess they didn’t want my money for this.
Score: 3 Votes (Like | Disagree)

vertical smile
I am still waiting for an tvOS version.
Score: 3 Votes (Like | Disagree)

levitynyc
Wow..it's amazing that Mario Day and Rusev Day fall on the same date this year.
Score: 3 Votes (Like | Disagree)

That would be a nice change I have to admit. Doubt it’s going to happen though, I think if they were going to they’d have done it by now with all the complaining that there’s been about it.
Score: 2 Votes (Like | Disagree)
Read All Comments