Fast Company today published its annual rankings of the 50 most innovative companies in the world, and this year, Apple is the number one company on the list for "delivering the future today."

Apple was picked for its impressive list of accomplishments in 2017, which included the iPhone X, the Apple Watch Series 3, ARKit, and its unique focus on hardware and software integration that sets it apart from its competitors. Apple designs its own chips that are optimized for its operating systems, resulting in performance that blows the competition away. 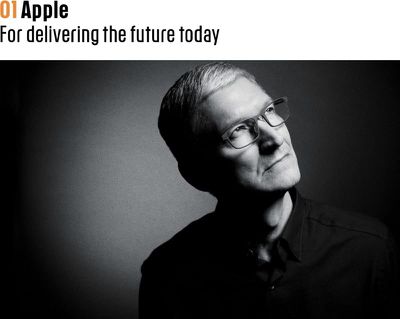 But creativity is more than skin deep--and Apple's approach to the hardware and software engineering that creates its experiences has never been more ambitious. Other makers of phones and tablets buy the same off-the-shelf chips as their competitors. Apple, by contrast, designs its own chips--so an iPhone packs a processor designed specifically optimized for Apple's operating system, apps, display, camera, and touch sensor. The company has gotten so good at chip design that the A10 Fusion inside the iPhone 7 trounces rival processors in independent speed benchmarks.

Apple also topped the list for its focus on privacy-based artificial intelligence advancements, its growing entertainment business, and its work to improve medical care with CareKit and ResearchKit. Its accomplishments boosted it up three spots from last year, when it was ranked the number four most valuable company in the 2017 list.

To create these rankings, Fast Company says that more than three dozen editors, reporters, and contributors surveyed thousands of companies to identify the most notable innovations of the year and trace their impact on businesses, industries, and the larger culture.

Other companies that made the top 10 list include Netflix, Square, Tencent, Amazon, Patagonia, CVS Health, The Washington Post, Spotify, and the NBA.

In addition to a master list, Fast Company publishes a breakdown of most innovative companies by sector. Apple also topped the list in the "Consumer Electronics" category, beating out companies like Amazon, Nintendo, and Sony.

farewelwilliams
to the bottom left is an updated mac mini ready to be manufactured but tim is looking the other way.
Score: 97 Votes (Like | Disagree)

ghost187
The comments will be epic! Hold on let me make make some popcorn
Score: 40 Votes (Like | Disagree)

btrach144
Reporter: "Congrats on the award Tim. What's going to be your next move?"

Tim: "We're going to remove AirPlay 2 from iOS because we haven't figured it out yet."

Andres Cantu
Hardware and Software integration does not mean much when you have to update your device almost every single week :(

M.PaulCezanne
I’m sure someone will call me a hater, but...

The Washington Post - because quality journalism is too expensive when top 7 lists and zero writing skills come cheap!

I’ll vote for Apple when I see more than $1,200 devices for animating poop emojis.
Score: 28 Votes (Like | Disagree)

JetLaw
I truly love Apple products, but I find it almost laughable to call them the most innovative company in the world. SpaceX, for example, is revolutionizing an entire industry right now...Literally doing rocket science. HomePod vs. Falcon Heavy? C'mon, it's not even close.
Score: 27 Votes (Like | Disagree)
Read All Comments