HomePod Costs an Estimated $216 to Make

It costs Apple an estimated $216 in raw components to build the HomePod, which sells for $349, according to research conducted by TechInsights and shared by Bloomberg.

Internal components like the microphones, tweeter, woofer, and power management chips cost Apple an estimated $58, while smaller components like the lighting system used for Siri and other animations cost $60. The A8 chip, which powers the speaker's spatial awareness, Siri features, sound adjustments, and other smart features, costs an estimated $25. 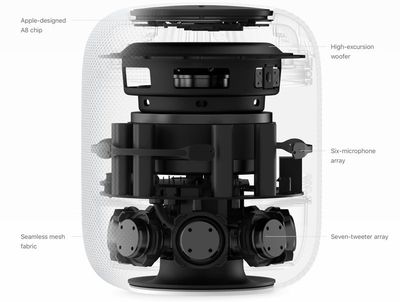 TechInsights believes the external housing and other exterior components add up to $25, while manufacturing, testing, and packaging cost an additional $17.50.

At $216 for parts and a $349 selling point, the HomePod brings in less money for each device sold than other Apple products like the iPhone. The $999 iPhone X, for example, uses components estimated to cost $357.50, and the entry-level iPhone 8 costs Apple an estimated $247.51 to make but sells for $699.

HomePod also has a smaller profit margin than competing speaker products from other companies. TechInsights says that while the HomePod has a profit margin of 38 percent based on component costs, the Google Home and Amazon Echo have margins of 66 and 56 percent, respectively. Both of those speakers use less expensive components and were not created with sound quality as the primary focus.

"Apple is compressing their margins a bit, wanting to go big or go home," said Al Cowsky, TechInsight's costing manager. "In doing so, I suspect they reduced the selling price from a normal Apple margin in order to sell more units on volume."

Component costs reports from companies like TechInsights do not take into account expenses like research and development, software creation, and other related costs, and can't be counted as an accurate look at Apple's profit margin for any given product.

Back in 2015, Apple CEO Tim Cook said cost estimates are often "much different from reality." "I've never seen one that is anywhere close to being accurate," he said.

OldSchoolMacGuy
As usual, people will ignore the assembly, packaging, shipping, marketing, R&D, and countless other costs that go into the device and complain about the price.
Score: 70 Votes (Like | Disagree)

DTphonehome
If accurate, then they’re charging a totally reasonable amount for it.
Score: 55 Votes (Like | Disagree)

I wonder why Apple took such an uncharacteristic route with regard to margins. Perhaps they expect a large influx of Apple Music subscriptions to make up for it? HomePod also isn't really designed to be a loss-leader and draw people into the Apple ecosystem itself, as it requires already owning at least one Apple device. Perhaps they thought people would balk at anything over $350.

It's a device that will keep people in the Apple ecosystem. If you have one of these, you're not gonna leave Apple Music. If you buy AirPods, you're unlikely to switch to Android also (yes they work with it but not as well). If you have an Apple Watch, you're not switching to Android either. These products are a great way to keep people on their platform and continue to make money there.
Score: 25 Votes (Like | Disagree)

gim
That seems like a lot, I expected something below $150 to be honest.
Does anybody know the component costs for Amazon's Echo?
Score: 13 Votes (Like | Disagree)

Still RIDICULOUS margin considering this acts as an anchoring mechanism for one to stay in the iEcosystem and thus, purchase more iProducts

Let Me add to your post, these are Apple products that the consumer wants to purchase and stay in their ecosystem, such as the Apple Watch, AirPods, HomePod, ect. Clearly the consumer knows they are making the commitment to stay in Apples ecosystem, Which is a direct result of satisfaction with the company.
Score: 12 Votes (Like | Disagree)

jav6454
Very tight margins... Apple is looking to bust their way into the living room even more at those margins.
Score: 11 Votes (Like | Disagree)
Read All Comments