Last month, Apple sued French tax activist group "Attac" for occupying its flagship Parisian store during a protest of what Attac called "wide-scale tax evasion." Today, Apple has asked the court in Paris to ban the group from its French stores and prevent any further stunts from happening.

In response to the court filing, Attac today mobilized in front of the court in further protest, sporting a Star Wars theme that equates Apple to The Empire and Tim Cook to Emperor Palpatine (via The Guardian and MacGeneration). 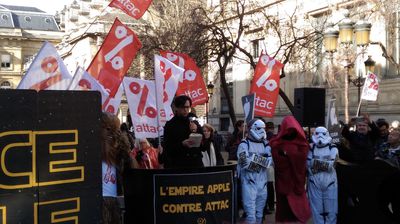 Image via @attac_fr
The court will rule later in February on the case, and Apple is said to hope for a full ban to prevent any Attac members entering or being near its Apple retail locations. Apple said the group "vandalizes" its stores and potentially "endangers" staff and customers. One protest in November 2017 saw Attac write "Apple pay your taxes" on a window at Apple Aix-en-Provence. Following Apple's claims, the group said its protests are "good natured."


At the height of the Christmas shopping period last December, about 100 Attac volunteers arrived at Apple’s Paris store at Place de l’Opéra. Some danced the conga, others unfurled a huge banner saying “We’ll stop when Apple pays” and some brandished huge cardboard cheques in reference to the European commission ruling in August 2016 that the iPhone maker must reimburse the Irish state a record €13bn (£11.5bn) to make up for what it considered to be unpaid taxes over a number of years.

In the case filing, Apple said that it has "a long tradition of supporting individuals and groups that peacefully express their opinions," but the company believes the vandalism of its stores and potential danger to its customers are steps too far. In addition to the ban, Apple France has asked the court to fine the activist group 150,000 EUR, and 3,000 EUR in commercial damages "if they break the ban."

Images via @attac_fr and @Soltrumbo
An Attac spokesperson denied the vandalism reports from 2017 and said the group "simply went into Apple shops in a festive and good-natured way with music and theatre."


Attac’s lawyer Julien Pignon told France Info: “These demands are totally out of proportion with regard to the superior principle of freedom of expression and freedom to demonstrate which is guaranteed by French law and the European convention on human rights.”

Attac's ire is focused on tax avoidance claims lodged at Apple over the past few years. In August 2016, the European Commission ruled that Apple must repay 13 billion euros ($15.46 billion) in back taxes dating between 2003 and 2014, which it reportedly avoided with the help of sweetheart tax deals from Ireland. Now, Apple will begin paying the back taxes owed to Ireland around March, expected to continue through September.

The French court is expected to announce its decision on the case on Friday, February 23.

This art is fantastic. I approve solely because of this. :D:apple:
Score: 16 Votes (Like | Disagree)

ericgtr12
This thread is worthless without the Darth Vader theme playing in the background.

magicschoolbus
A little surprised by the comments here.

It's no surprise that Apple avoids taxes. How does this make them communists/socialists? I am all for capitalism, and agree that soclist ideas are taking place in the US; but how does the public protesting a company to pay taxes make them socialists?
Score: 9 Votes (Like | Disagree)

This made my day! Great art work!

Is Apple against free speech?

Where in the piece does it show or imply that Apple is against free speech? Apple doesn't want them trespassing, damaging property, or obstructing and endangering customers and staff.

SigEp265
They just wanted an excuse to dress up as a storm trooper.
Score: 5 Votes (Like | Disagree)

A little surprised by the comments here.

It's no surprise that Apple avoids taxes. How does this make them communists/socialists? I am all for capitalism, and agree that soclist ideas are taking place in the US; but how does the public protesting a company to pay taxes make them socialists?

Um, the fact that they're socialists makes them socialists. Apple does pay their taxes, as little as legally possible, as is their right and obligation to shareholders... just not as much in taxes as this group thinks they should. They see deep pockets and a successful company, so they stick their hand out, then cry like babies when their hand gets slapped away. Apple isn't in business for charity, they're in business to make money. As much money as LEGALLY possible. And I believe they should be allowed to do so.
Score: 5 Votes (Like | Disagree)
Read All Comments