iOS game developer Snowman today announced that "Alto's Odyssey" will launch on the iOS and tvOS App Stores on Thursday, February 22. With the confirmation of a release date, Apple today shared a new card on the iOS App Store noting the launch, along with snippets of an interview with the game's developers (via TouchArcade). The game was originally set to debut in the summer of 2017 but got delayed because "it takes longer to build things right." 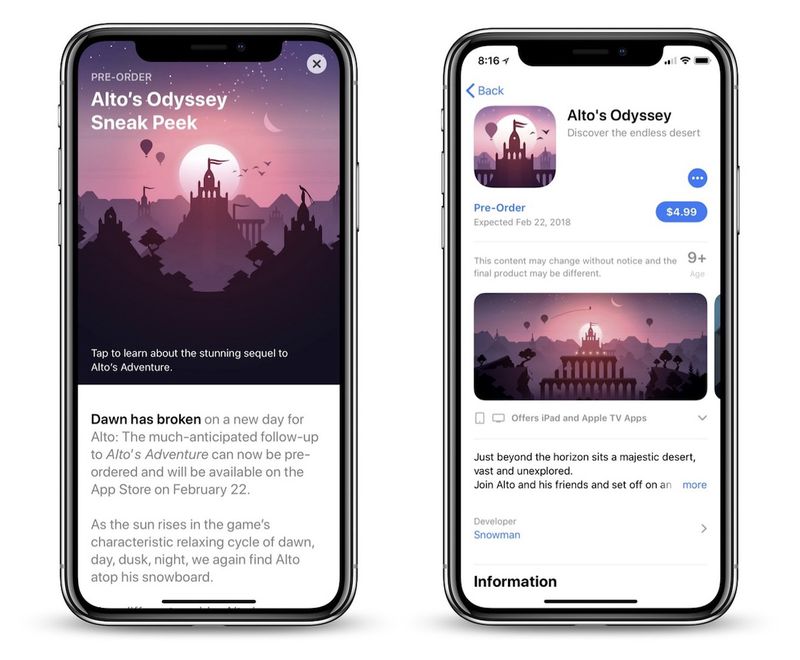 Alto's Odyssey is a sequel to the original 2015 game "Alto's Adventure," and will introduce a few new pieces of gameplay into the endless runner formula from the first game, like wall jumping, balloon bouncing, and more. Characters can be unlocked and each will have their own abilities, and players will be able to relax a bit with a "Zen Mode" that removes all coins, power ups, and scores to focus on exploration.

"We want to make sure both games feel connected," says Harry Nesbitt, lead artist and programmer for the eight-person Team Alto. "They're part of the same world, so they need to feel like they're painted with the same brush. But we also want to celebrate the new desert environment and explore everything it has to offer."

Instead of a snowy location, Alto's Odyssey takes place in a desert and players will control Alto through the franchise's "one-touch trick system" to chain combos and complete level goals. The sequel also has a Photo Mode, where players can pause the game and take pictures of their trips through the desert to share online with friends and family.


Alto's Odyssey is a universal iOS app, and supports the iPhone, iPad, and Apple TV, syncing progress across all devices. The game is up for pre-order today [Direct Link] ahead of its February 22 launch date, priced at $4.99 "with no ads or in-app purchases."
Tag: Alto's Odyssey
18 comments

HobeSoundDarryl
What??? Holding back a software release in the interests of getting it right? What universe are these devs from? Don't they know modern app business is release at first working beta or alpha, and then (maybe) perfect over countless bug fix updates?

Kudos to them for at least aiming at putting quality first! I wish others would at least try that kind of approach too.

And the first "chapter" (Adventure) of this game was/is quite great IMO!
Score: 5 Votes (Like | Disagree)

ipedro
Instant buy for me. I didn’t even care about the price. I still play Alto’s Adventure, years after I finished all the challenges. It just kept getting better, even after they clearly didn’t have to. The tvOS version and the Zen Mode came as free updates gave the game an entire new life.

Odyssey looks gorgeous. I’ll spend many hours on this game for years to come.
Score: 1 Votes (Like | Disagree)

Pre-orders are not just for products that have a likelihood of selling out...(e.g. dvd & blu ray movies, console video games, etc.) Many of those do not sell out on release date either, but customers still pre-order because they want the item as soon as it becomes available. Pay ahead of time for a product you know you want, so you get it on release day without having to do anything else.

In this case, pre-ordering makes it so you don't have to remember to come back to the app store on the day it's released - it will be automatically downloaded to your phone when it becomes available on the app store. Same concept as the non-app store example described above - pay ahead, get it when it becomes available.
Score: 1 Votes (Like | Disagree)

macduke
I'm still looking forward to Sky being released—you know, that cool looking game that was on display at the iPhone event in September? I looked up their Twitter and it looks like there was a limited release in New Zealand about two weeks ago. Anyone from NZ played it yet?
Score: 1 Votes (Like | Disagree)
Read All Comments