Apple customers in Australia are always the first to get their hands on new devices on launch day, and now that it's after 9:00 a.m. on Friday, February 9 in the country, the first HomePod orders have started arriving to customers.

Australians who ordered the HomePod starting on January 26 have begun receiving their deliveries and have shared their excitement over the new device on reddit, Twitter, Instagram, and the MacRumors forums. 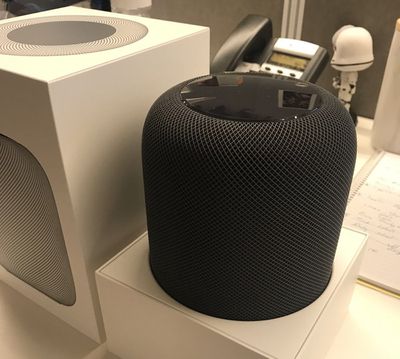 Image via Twitter user @rajdeut
Apple Stores in Australia are also now open, allowing customers who placed orders for in-store pickup to receive their devices. Retail locations also have stock for walk-in purchases, and in Australia, same-day in-store pickup is once again available.

Following Australia, HomePod sales and deliveries will kick off in the UK in about 10 hours, followed by North America. Apple Stores in all three countries are opening up right around 8:00 a.m. to allow customers to make HomePod purchases.

Throughout the pre-ordering process, which kicked off on January 26, Apple had ample HomePod stock for customers. Shipping estimates and in-store availability only began slipping earlier this week, likely due to Apple's preparations for launch day. Orders placed online for a HomePod will ship out early next week.

Make sure to stay tuned to MacRumors both tomorrow and throughout next week, because we'll have plenty of HomePod coverage to share.

Apple should launch in Australia a day later. Their homeland should not be the lastest in receiving their own products. It should be the first one.

I never understood this way of thinkng. Them getting it first has zero effect on when we get it here in the US. As long as you get yours when you are supposed to, why would you care when others get theirs? It is the exact same product, it is not like the first 1000 users are getting some "unique version".
Score: 21 Votes (Like | Disagree)

Apple should launch in Australia a day later. Their homeland should not be the lastest in receiving their own products. It should be the first one.

Never in the field of audio technology was so much fuss made by so many to so few who care.

Genuinely never been more underwhelmed by a new Apple product.

And yet you wasted time to come to this thread and complain to those that do care about it.
Score: 13 Votes (Like | Disagree)

Never in the field of audio technology was so much fuss made by so many to so few who care.

Genuinely never been more underwhelmed by a new Apple product.

deanthedev
You're up, iFixit. Waiting for your teardown.
Score: 9 Votes (Like | Disagree)

Its okay. Samsung will happily buy the refurbished HomePods so they can copy it.