NYPD Rolls Out iPhone 7 and 7 Plus Handsets to Manhattan Officers, Replacing Windows Phones

The New York Police Department is making good on a promise made last year to dole out iPhone handsets to its officers, replacing around 36,000 Windows Phones as part of a new hardware upgrade strategy, reports the New York Daily News.

The NYPD has been rolling out hundreds of the phones since Christmas to Manhattan cops, who can choose between iPhone 7 and iPhone 7 Plus models. The platform switch comes at no cost to the police department because the handsets are filed as upgrades under the agency's contract with AT&T.

Image via New York Daily News
"We've been giving out about 600 phones a day," said NYPD Deputy Commissioner for Information and Technology Jessica Tisch. "We're seeing a lot of excitement."

Police in the Bronx and Staten Island have already received their new phones, with officers in the Queens and Brooklyn boroughs next in line to make the switch to iOS.

Armed with Apple's smartphones, the NYPD has seen its response times to critical crimes in progress drop by 14 percent, according to Tisch. The iPhones also allow cops to get videos and surveillance pictures of wanted suspects within minutes of a crime.

"I truly feel like it's the ultimate tool to have as a patrol cop," said Police Officer Christopher Clampitt. "We get to the location a lot quicker," he said. "By the time the dispatcher puts out the job (on the radio) we're already there."

Before the rollout, NYPD's smartphones of choice were Nokia's Lumia 830 and Lumia 640 XL, released in October 2014 and March 2015 respectively. The discontinued devices run Windows Phone 8.1, which Microsoft ended support for in July 2017 to focus on its newer Windows 10 Mobile platform and cloud-based services.

In October 2014, New York City officials announced plans to roll out handheld devices to every NYPD officer for the first time ever, along with tablets for every patrol car. The $160 million initiative was part of a plan to bring the department into the 21st century.

In a few years they will realize how horrible the iPhone is and switch to android.

Secondempire
Total Windows Phone usage now down from around 36,002 to around 2.
Score: 8 Votes (Like | Disagree)

TComm
The NYPD made the right decision. Apple needs to focus more on business corporations.
Score: 5 Votes (Like | Disagree)

I don’t understand how they bought a windows phone in the first place. Who thought that was a good idea

Usually high level executives that are out of touch with actual usage makes these decisions. What possibly factored in, is that they probably have a lot invested in MS technologies, so the customer rep probably offered them a huge deal to use the phones
Score: 4 Votes (Like | Disagree)

How is a phone altering the response time? This sounds more like a process change having an effect and someone piggybacking on that to justify their technology changes. Additionally, I'm quite confident their former phones had cameras.

It's a good choice to abandon the MS phone though. These devices need to be in support.

I am assuming they have their CAD system on this new phone which allows the officers to actually see the calls before they are sent by radio. We have this on our iPhones and it was not available for Windows phone thru our vendor. It definitely speeds response time especially in a very busy place like that.

Yes their former phones had cameras. There is a program on iOS they are using that streams cameras to their phones from events and from dispatch that allows them to see what is going on prior to their arrival.
Score: 4 Votes (Like | Disagree) 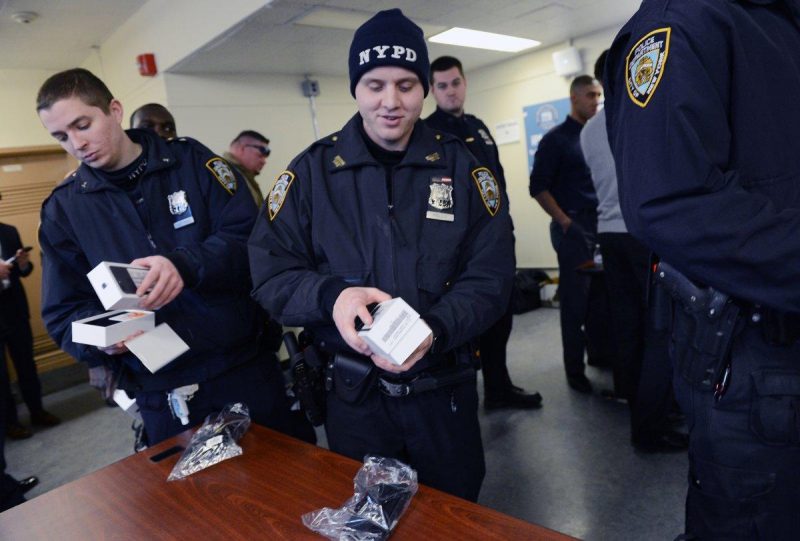 In a few years they will realize how horrible the iPhone is and switch to android.

I love Android. My Pixel 2 is amazing. I can’t wait to see what the Pixel 3 will bring. I’m also always keenly interested in what Samsung, HTC and LG and Huawei and Xiaomi are doing. At some point in a few short years I can see myself going exclusively to Android if the things I want to happen at Apple fail to materialize.

But for the police...really? No...not there yet. Quality control has been horrible on the 2017 Pixel 2 XL variant. I have lost count of how many people I’ve seen, and that includes my husband and myself, who have had to go through Google’s RMA process to get a non defective phone. Some people have endured this three or more times! That’s not very encouraging.

The Pixel 2 fares much better in terms of QC, but is probably too small for a lot of these guys. That would leave you with major players LG and Samsung. Politically, there might be some issues going with foreign manufacturers right now. That aside, LG customer service is not well established and proven in the US nor is quality. HTC is struggling.

The Chinese manufacturers are butting up against security concerns and protectionist policies, as seen in the recent breakup of the deal between AT&T and Huawei over security concerns. Lack of official carrier support hurts Huawei, Xiaomi and HTC since a lot of customers rely on the carriers for customer support when things go wrong on these imports.

Samsung would be the best bet, but they can lag and and be incredibly fragile. The Active versions of the Samsungs would suit them but I think those are AT&T exclusives. I don’t think the police would even be getting the latest flagships. Every Samsung my husband and I have used has run into very inconveniently timed hiccups. That’s not a big problem for us, but for a police officer it could be dangerous.

I realize iOS 11 has some issues, but Apple is committed to fixing them and I have not run into any that stop me in my tracks except very, very rarely.
Score: 3 Votes (Like | Disagree)
Read All Comments